Northern Ireland's political leaders called for calm after a night of riots and violence at a sectarian interface in East Belfast, reports Ed Jacobs. 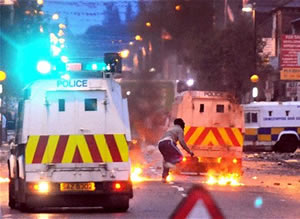 Political leaders in Northern Ireland have called for calm following a night of violence between rioters at a sectarian interface on the lower Newtownards Road and Mountpottinger Road in East Belfast. Police have confirmed shots were fired by nationalist and loyalist crowds in what they described as “probably the worst violence we have seen in that area for some considerable time”.

Reverend Mervyn Gibson, who was at the scene, reported:

“After midnight there were two bursts of gunfire. Two young men on the Protestant side were injured, both shot in the legs. I was with them both and helped others to arrange to get them to hospital.

“It really was a serious scene. I haven’t seen trouble like this for maybe 10 years in the area.”

Reacting to events as they unfolded, Sinn Fein’s Lord Mayor of Belfast, and a local councillor for the Short Strand area, Niall O Donnghaile, spoke of an unprovoked, carefully orchestrated riot which saw homes attacked with “with petrol bombs and paint bombs, bricks, golf balls”.

In his analysis, the BBC’s Mervyn Jess said of the situation:

“This particular interface on the lower Newtownards Road has a long history of sectarian violence. The area around St Matthews Catholic church was where the Provisional IRA was involved in its first major gun battle in 1970. At the time republicans claimed they were defending the church and the Catholic community who live in the adjoining Short Strand area, from loyalist attack.

“Confrontations have flared up sporadically ever since. Following the signing of the Good Friday Agreement and the ongoing peace process, the Catholic church has still been the target of sectarian attacks. Both sides have blamed each other for the violence along the interface. The rioting on Monday night was the most serious for some time.”

“I am making a very serious statement and as far as people in the Short Strand are concerned, the UVF launched an attack on the Catholic community in this area. I think it’s absolutely disgraceful.”

But for the UPP, its MLA for the area Michael Copeland concluded that what mattered most was not who was to blame but how to stop and prevent such violence occurring again. He went on to explain:

“With the onset of summer there must a joined up approach between the PSNI and community workers in the area to stem the violence on this interface.”

“It is not fair that people living in the area are subjected to this kind of turmoil, when the vast majority just want to live their lives in peace…”

“Those engaging in this rioting have no respect for the local community and nothing to offer but misery. There can never be any justification for this kind of violence.”

Local community worker Jim Wilson meanwhile is quoted in the Newsletter as saying:

“This has been brewing for some time. There are more and more people gathering up on each side, there could be as many as 400 or 500 on each side.

“This is very serious, and it is a major setback for community relations. This is the worst I have seen in years, at one point they were fighting hand-to-hand. It is a very dangerous situation at the moment.”

With the violence coming after the first contentious parade of the summer marching season, community and political leaders will be hoping that last night’s violence was not a sign of things to come.