In an inspirational lecture the Burmese pro-democracy activist Aung San Suu Kyi spoke of her and her movement’s struggle for liberty and democracy in Burma. 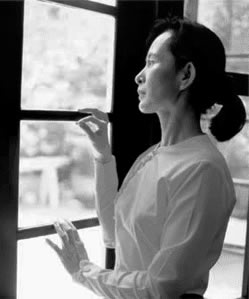 In a deeply moving and inspirational lecture the Burmese pro-democracy activist Aung San Suu Kyi has spoken of her and her movement’s struggle for liberty and democracy in Burma. In a departure for the BBC, this year’s Reith lectures were recorded in Burma and then smuggled out of the country – the first being played back to an audience at Broadcasting House this lunchtime.

As well as members of the public, dissidents from around the world and members of Aung San Suu Kyi’s family were also present. Once the recording had been played, a live audio feed to John Simpson in Burma allowed the audience to question the Nobel Peace Prize winner.

Aung San Suu Kyi spoke of how during her years of house arrest, it was the BBC that spoke to her and allowed her, despite the communication only being one way, to feel as if minds were connecting, partially exercising what she felt was a fundamental human right. She went on to discuss why people yearn for freedom and the duties of a dissident.

A number of times, she spoke of a dissident’s “duties” and how the path of dissidence is a chosen one and that liberty is a product of work, not a philosophical concept. It cannot be internalised and must be exercised. Choosing the hard path, she said, was a dissident exercising that fundamental human right to freedom of choice.

In one of the most moving passages she explained that one of the reasons she and her comrades carried on their struggle was they “don’t’ know how to stop”, asking how could they desert their comrades in prison.

The questioning was robust and she cited the rebellions that started in Tunisia as inspirational to her comrades in Burma. She said there were many reasons why the outcomes of the Tunisian and Burmese rebellions were so different despite many similarities but particularly mentioned how the Burmese military had opened fire on their own people.

On one occasion it was suggested that the Burmese pro-democracy movement had become stale. She replied that the movement was still in its infancy and reminded the audience that nobody predicted the Arab spring.

Despite the unusual format of this year’s lectures, and the speaker being so far removed behind a screen of censorship breached only by a BBC phone line that could go dead at any time, the occasion felt very intimate and Aung San Suu Kyi’s limited presence still brought about incredible reverance from the audience. Her voice was assured and clear. She spoke softly and calmly.

She was particularly encouraged by the numbers of young supporters her movement has. Speaking of her movement she said “we are still in the first generation” – adding that she hoped the struggle would not require a second.

The BBC Reith Lectures by Aung San Suu Kyi will be broadcast on the June 28 and July 5, at 9am, on BBC Radio 4.

12 Responses to “Aung San Suu Kyi: The struggle for liberty and democracy in Burma”