Those within the coalition are not concerned about the principle of the Archbishop Rowan Williams speaking out, but that his remarks make uncomfortable reading. 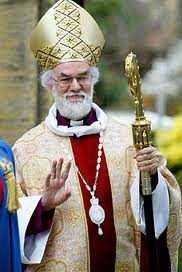 The Archbishop of Canterbury’s critique of the coalition in the latest edition of the New Statesman has served to polarise opinion about the role that those of faith, particularly within the established church should play in public life.

On the one hand there are those such as the Conservative MP, Roger Gale who has responded to Rowan Williams comments by concluding:

“For him, as an unelected member of the upper house and as an appointed and unelected primate, to criticise the coalition government as undemocratic and not elected to carry through its programme is unacceptable.

Dr Williams clearly does not understand the democratic process. If he did, he would appreciate that elected members of the House of Commons are not mandated.”

Vince Cable, however, while stating that he was “baffled” by the criticism never the less welcomed the contribution from the Archbishop as part of the on-going “intense debate”.

And Tony Blair has used a series of interviews this morning to speak up for the rights of the clergy to make stands such as this, recalling of his own time in government:

“Obviously people used to criticise our policies not just on Iraq and foreign policy but on domestic policy and reform as well. It’s just part of the way things work. He’s perfectly entitled to put his position and I should imagine the government will say they’re pretty relaxed about it and get on with whatever they want to do.”

In this, he has been joined in a somewhat odd partnership with Lord Tebbit, who has said of the words used by Dr Williams:

“He is quite right that there are policies of the coalition for which nobody seemed to vote, and policies for which people voted which are not being carried through by the coalition.”

Even Alistair Campbell, who has so famously be associated with the tag line that we “don’t do God”, writing on his blog today argues:

“Rowan Williams is right to speak out, and right on the substance. As I know from my time in government, Archbishops can provoke and anger from time to time, but why shouldn’t they?

“They are people in important positions of moral and religious leadership, and part of their role must be to contribute to political and policy debate.”

While the debate around the wisdom, or otherwise of the Archbishop involving himself in the political sphere in this way will continue to be a source of controversy, the fact remains that he has a right to be able to say what he has. History is littered with examples of how those of faith have proved invaluable to social and political changes and developments.

It was William Wilberforce for example who led the campaign within parliament to end the slave trade, spurred on at the time by his conversion to Christianity.

And more recently Christian charities played a key role in leading the successful “Make Poverty History” campaign and the decisions by the Archbishop of York, John Sentamu in 2007 to cut up his dog collar live on the Andrew Marr programme in protest against the continued reign of Robert Mugabe in Zimbabwe met with little objection from politicians in the UK, despite the intensely political nature of what he had done.

It can only be concluded therefore that what those within the coalition are concerned about is not the principle of Rowan Williams speaking out, but the fact that the content of his remarks make for uncomfortable reading.

Indeed, if the government had real problems with the Church of England speaking out in this way, why then do their plans to reform the House of Lords include spaces for, an albeit smaller, number of bishops? Indeed, the Conservative Party chair, Baroness Warsi has herself declared that the coalition “does God”.

Perhaps the final words however should go to Gordon Brown. Someone who many will continue to mock, but who’s faith played and continues to play a key role to his political beliefs and aspirations.

Talking in February on the issue of Faith and Politics he concluded:

“My religion and reason tell me that we cannot for long be truly happy in any place when we see opportunities denied in every place; we cannot feel fully secure at any time when we know millions are feeling insecure just about all the time; and we cannot be wholly comfortable anywhere when the left out millions are found everywhere.

“So I conclude; yes, for people of faith there is the risk of the sin of commission. So we must be humble enough to guard against theocratic error when faith enters the public square. But yes too, there is a greater risk, the sin of omission and we must never again allow the voices of faith to feel excluded from their rightful role. So let the trumpet sound. The voices of faith must and will be heard.”