If the Spring has run dry it's because of the ruthless cruelty of the dictators, not any lack of democratic will or bravery on the part of the protesters. 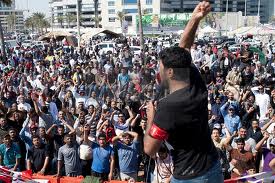 The Bahrain Grand Prix will go ahead this year in October despite huge opposition inside and outside the country. The race was initially called off following the brutal suppression of anti-government protests in the country. The Bahrain government, under king, Hamad bin Isa al-Khalifa, only lifted martial law on Wednesday after 11 weeks, but is still said to be attacking peaceful protesters according to human rights observers.

The state is still alleged to be arresting and torturing its people following a series of democratic protests in the wake of the Arab Spring which led to Saudi Arabian troops being called in to suppress the uprisings.

“There will be increased repression of human rights if the grand prix is held. To go ahead pretending it’s business as usual is very bad when people continue to be detained and tortured.

“If the decision goes through we will return to Pearl Square and the groups have called for a Day of Rage.”

The organisation Avaaz launched a campaign against the race being staged and had some 320,000 signatures, in support, on their on-line petition. Alex Wilks campaign director for Avaaz said:

“Formula One’s decision is a kick in the teeth for the Bahraini people. The race will happen in a country where government troops continue to shoot and arrest peaceful protesters.

“Money has trumped human rights and good judgement, so now F1, plus Red Bull, McLaren, Ferrari and every other team will be directly linked with a bloody crackdown that’s ruined the lives of hundreds of innocent people.”

Syrian forces have opened fire on protesters today. At the time of writing reports the death toll to be 27 in the central city of Hama. The BBC writes that “security forces opened fire on a crowd of about 50,000 people” in the city according to activists.

This video will shock you:

“In a pattern seen every Friday since mid-March, protesters have marched out of mosques after noon prayers, to be met by security forces intent on crushing a revolt against (President) Assad, in power in Syria for the last 11 years.

“Two U.N. special advisers said they were alarmed about the Syrian authorities’ “systematic and deliberate attacks” against civilians, adding they appear to have been targeting residential neighborhoods in their operations.”

Left Foot Forward, earlier this week, reported on the Syrian revolution and the horrific murder of Hamza al-Khatib, who activists say was tortured and mutilated. He has become a symbol for protesters and in Dael, a town near Deraa, “about 5,000 protesters raised pictures of him as they called for freedom and the downfall of the regime”.

NATO announced on Wednesday that they have approved a three month extension to its Libya mission, and soon after, launched air strikes against Tripoli the capital city of Libya, that is still in the control of Muammar Gaddafi. NATO secretary-general, Anders Fogh Rasmussen, is quoted as saying:

“This decision sends a clear message to the Gaddafi regime: We are determined to continue our operation to protect the people of Libya.”

NATO have made Gaddafi standing down a pre-condition of any ceasefire. On Monday the South African President Jacob Zuma visited Libya in an attempt to negotiate a ceasefire. The Guardian have an article from Ranj Alaaldin on why such overtures are a mistake:

“But mediation or ceasefire initiatives such as South Africa’s, and others encouraged elsewhere, have something wrong with them: they offer Gaddafi a lifeline at a point when he is facing an increase in defections and significant opposition progress on the battlefield, and when he is becoming increasingly isolated internationally – as shown last week when Russia shifted its position by calling on him to stand down.

“It is clear that the west, in the form of the Nato-led coalition, has a strategy in Libya and it is working. It should be left alone.”

On the other side of the country, China have made diplomatic contact with rebel forces in a diplomatic set-back for Gaddaffi that follows France having said they are working with those close to the dictator who they believe could convince him to relinquish power.

What started out as opposition protests have now tipped Yemen to the brink of civil war today after the country’s President Ali Abdullah Saleh was wounded in a rocket attack on his presidential palace. His injuries are not reported as severe but four guards were killed and seven officials were injured in the attack including prime minister Ali Muhammad Mujawar and his deputy Rashad Al-Alimi alongside the speaker of the country’s parliament.

“It was the first time that tribesmen have targeted President Saleh’s palace in nearly two weeks of heavy fighting with government troops in the capital. Their response came after government forces launched an intense artillery barrage at the homes of two tribal leaders and a top military general who also joined the opposition.

“The nation is on the brink of civil war after two weeks of fighting between Saleh’s troops and tribesmen loyal to Sheik Sadeq al-Ahmar, head of the Hashid, Yemen’s most powerful tribal confederation.

“More than 370 people have been killed, at least 155 of them in the last 10 days, since a popular uprising against Saleh’s nearly 33 years in power began in January.”

The Arab Spring was a spontaneous wave of democratic uprisings, as surprising as they were inspiring but some have now asked if the Spring has run dry. If it has it’s because of the ruthless cruelty of the dictators and their security forces, not any lack of democratic will or bravery on the part of the protesters. It certainly doesn’t help to have internationally recognisable brands like Formula One appearing to turn a blind eye to the actions of such rulers.

The Guardian has mapped out the key events of the Arab Spring in this timeline.