One of the key arguments at yesterday’s Progress conference was that Labour, not the Conservatives, are the party who can rightly claim to be the party of law and order. 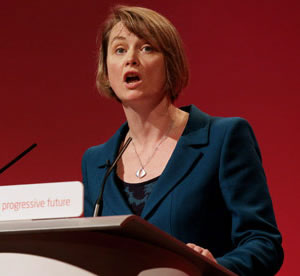 One of the key arguments at yesterday’s Progress conference was that Labour, not the Conservatives, are the party who can rightly claim to be the party of law and order, with shadow home secretary Yvette Cooper attacking the Tories head on, saying their “reputation” for being good on law and order “was never justified and was only ever rhetoric”.

Under Conservative governments, she said, “the crime rate always went up”. Cooper contrasted this with Labour’s achievements from 1997-2010, which left them as the only government to ever leave office with a crime rate lower than when they entered.

“We should be proud of our record and the things that we did, but should also look forward. We need to go further on rehabilitation and preventing re-offending, but also be clear about the checks and balances that we believe should be in place.

Simon Reed, vice chair of the Police Federation of England and Wales, reiterated this point about Labour’s achievements and went even further, saying that he never understood why Labour never claimed the credit they were due on reducing crime levels.

He argued that this reduction was entirely due to actions taken by the Labour government in the early years and the work done to build relationships between different bodies within the criminal justice system.

These two messages combined seem to provide a firm foundation for Labour to move forward from; as Cooper said, the Conservatives’ unrelenting focus on reducing the deficit combined with their suspicion of the state runs the risk of undermining not only Labour’s achievements, but also the ability of the police to do their job.

The current practice of briefing against the state is “deeply risky” and will only undermine the good work done by the police.

David Cameron has as yet not made a single major speech on law and order and the last week has shown there are deep fault lines within the coalition on the subject. The front page of today’s Observer further highlights this, with the headline:

The panel were united in their agreement that Labour should not stand idly by and watch the coalition’s cuts driven agenda wreck the progress made and should challenge the government to take steps to ensure there is no upwards trend in the crime rate.

Away from Labour’s record, the core of the discussion inevitably focused on the discussion of ‘discounts’ on sentences for criminals. Justice secretary Ken Clarke’s proposed reductions of up to 50 per cent for those who plead guilty drew the ire of both the panel and the audience with such discounts described by Yvette Cooper as:

“…neither justified nor justice.”

There was broad agreement that such measures are not popular with the public and neither is the current approach where the majority of offenders are released after serving 50 per cent of their sentence. Simon Reed argued this “is not justice and not fair on the victims and their families”, adding:

“If people are only going to serve 2-3 years of a six-year sentence, the government and judges need to be honest about this and only sentence them to that shorter period.”

Former cabinet minister Hazel Blears went one step further, suggesting that in cases where the evidence is conclusive and the criminal still refuses to plead guilty, they should be punished by adding additional time to their sentence. Such a move would be popular, given public feelings about discounts, and may also serve to save money, with fewer trials dragged out.

The panel closed with a call for an independent review of the police and the wider criminal justice session – proposals which may well be given more thought soon.

18 Responses to “Cooper: Tory “reputation” on law and order “was only ever rhetoric””