Ed Jacobs reports on disqualification of two Liberal Democrats from the Welsh Assembly. 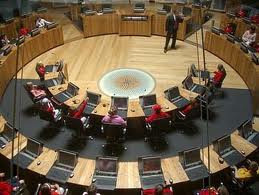 The Welsh Liberal Democrats have been left red-faced as it emerged that two of the party’s five AMs in the chamber have been forced to stand down, subject to a motion being passed by the Senedd reinstating them.

The BBC has reported that John Dixon and Aled Roberts have been temporarily disqualified from their positions as they were both members of organisations that, under regulations, AMs are not allowed to be part of, namely the Care Council for Wales and the Valuation Tribunal for Wales.

While the members have now stepped down from the organisations concerned, it had been expected that they would be reinstated to their positions by AMs yesterday following the passing of an expected motion. However, the motion did not get moved by the Liberal Democrats, after it emerged that Labour were not prepared to allow them back so easily, believing that the breach of the rules were more than just a “technicality”.

The Western Mail quotes a Labour AM as saying: “The two of them don’t seem to realise just how much trouble they’re in” while another has accused them and the Liberal Democrats of having been “arrogant” in thinking a motion to reinstate them would simply be passed without any fuss.

Labour and Plaid Cymru have argued that a full investigation into the matter is required, which presiding officer Rosemary Butler has agreed to instigate. In a statement, a spokesperson for the Assembly explained:

“The presiding officer has instructed the clerk of the Assembly to investigate and report to her on the circumstances that led to the election as Assembly members of two Liberal Democrat candidates who were disqualified from being AMs.

“This would enable Assembly members, if the Liberal Democrats were to pursue a motion for the disqualification to be disregarded, to be fully informed about the relevant issues. If such a motion were passed by a straight majority of members voting then the disqualification would be lifted.”

“I think it’s appropriate that there is a period of contrition because clearly this has put everyone through a difficult period and the members concerned obviously have responsibility to ensure that they are eligible to stand when they stand and so I think we need to sort those issues out first.

“It is a bit embarrassing and it is a bit of a distraction. It’s very important that we sort this out.”

Not everyone however is convinced that the pair, elected on the regional list vote, would be legally able to return to the Assembly, even if a motion reinstating them was passed by AMs. Speaking to BBC Radio Wales, Winston Roddick QC, a former chief legal adviser to the Assembly argued:

“The law is quite plain. It simply states the election by which they became AMs was void and it’s as if the election had not taken place and they had not been elected.

“What you have are two vacancies. The question is who now should be occupying these seats?Is it the person who came second in the election or should there be another election?

“My provisional view is that rather than hold another election, which I don’t think they have the power to do, the person who should occupy the seat is the person who came second in the poll.”

In any by-election, of course, the Lib Dems could find their numbers further reduced. Meanwhile Welsh UKIP MEP, John Bufton, has confirmed that he has reported the two in question to the police, on the basis of electoral fraud.