Social Liberal Forum's Dr. Prateek Buch argues that Yes to AV would benefit the progressive majority and democracy in general. 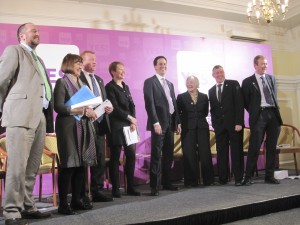 Two topical political issues – the imminent referendum on the alternative vote, and the Liberal Democrat action to have Andrew Lansley’s health reforms significantly amended – are intimately linked, but perhaps not in the way in which press commentary might suggest. Contrary to some opinion, it’s a Yes vote that would strengthen the Lib Dems’ position within this and any coalition and would bring far greater progressive influence to bear on government.

Arguing for the status quo; a first-past-the-post electoral system that returns a majority of MPs without majority support and gave rise to the abuse of expenses amongst other distortions, the No campaign cites FPTP’s supposed ability to deliver ‘strong government’.

Leave aside the fact that a plural political landscape delivered a coalition even under the current system, and picture today’s Conservatives in power on their own: no rise in the income tax threshold or capital gains tax; tax cuts for the rich; and of course Lansley’s unpopular and non-evidence based NHS reforms pushed through unaltered.

It’s coalition government that’s kept a check on the worst Tory tendencies, and given a chance for progressive policies to be put into place.

Beyond the immediate impact of the referendum’s result on the internal dynamics of the current coalition, we need to analyse which result would be favourable to delivering a progressive, centre-left agenda in the long run.

As Vince Cable made plain at the weekend, it’s clear that a plural, progressive alliance, largely reflecting the nation’s centre of political gravity, has been thwarted in recent years by FPTP. Successive governments – whether Blue or Red – have formed on the back of an electoral system that leaves many millions of people without an MP they support to any degree, and have enjoyed a virtually free hand in parliament to pursue policies that fail to enhance the interests of most of the electorate.

It’s time to bring the undemocratic farce that is FPTP to an end, and May 5th’s referendum is a once-in-a-generation opportunity to do so.

So would AV give us better government – would it lead to fewer fiascos like the current NHS reforms?

Of course the best way to have excellent progressive policies implemented is to have a majority government elected on such a platform – as Nick Clegg made clear in a keynote speech last week. Failing that, an electoral system that forces MPs to canvass broader support, that gives each voter at least some say in who represents them, and that makes plural government more likely, is a clear improvement over the status quo.

Not only would Conservatives find it harder to push through ideologically-driven market reforms to public services – the NHS reforms being an example – but Labour’s authoritarian streak would also be quietened. And not only in coalition – any majority government returned by AV would have to take a more considered approach to public policy, taking account of how it sustains broad cross-party consensus for its manifesto.

It might not be the ideal way of organising our national politics, but the alternative vote is undoubtedly a better way; in giving everyone more of a say in how the country is run, it makes shrill appeals to a minority of voters or vested interests less likely to win absolute power – and that can only be a good thing.

49 Responses to “Vote yes for progress and the progressive majority”