The Left must not allow a proud history of anti-fascism to be hijacked by alliances with Islamists, which won't help victims of bigotry, reports George Readings. 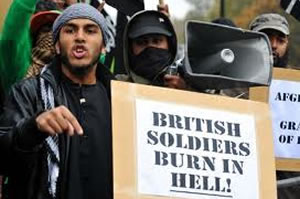 This October will see the 75th anniversary of the Battle of Cable Street, when a coalition of local left-wing and anti-fascist groups prevented Oswald Mosley’s blackshirts from marching through the East End. Mosley has gone, but others have taken his place, tailoring their message to a modern audience.

A Searchlight report published in February this year revealed that 52 per cent of British people believe that Muslims “create problems in the UK”, and that around 60 per cent believe immigration has been generally bad for the country.

It should be no surprise then that, where Mosley’s British Union of Fascists were obsessed with Jews, their modern day equivalents in the BNP are  more concerned with immigration and Muslims.

The result of modern fascists’ targeting of Muslims can be seen all around. Earlier this week, a man was convicted in Gainsborough of racially aggravated behaviour for harassing a group of Muslims meeting to plan the creation of a new mosque. Just a few weeks ago, vandals smashed up Muslim graves in High Wycombe.

It is to the Left’s credit, then, that it now stands against anti-Muslim hatred just as it has always stood against anti-Semitism, homophobia, racism and other forms of bigotry. However, some groups are exploiting the Left’s principled stance for their own ends.

This weekend, a group calling itself the ‘Enough Coalition‘ will hold a conference at the London Muslim Centre, adjacent to East London Mosque in Whitechapel, on ‘Confronting Anti-Muslim Hatred in Britain and Europe’. The event will be well attended by academics and left-leaning politicians and journalists such as Tony Benn and Mehdi Hasan.

But they will not be the only ones speaking. Joining them will be three individuals with whom they are likely to profoundly disagree with on a number of key issues. Kamal el-Helbawy, Azad Ali and Daud Abdullah are all UK-based Islamists whose stated views are antithetical to much that the Left holds dear.

Kamal el-Helbawy is a prominent spokesperson for the Muslim Brotherhood; in the past, el-Helbawy came to prominence after justifying the killing of innocent Israeli children on the grounds that they are “future soldiers”.

More recently, he took part in a discussion on the website onislam.net about Osama bin Laden’s death. He called bin Laden “a great mujahid [one who fights jihad]” and said:

“First of All, I ask Allah to have mercy upon Osama Bin Laden, to treat him generously, to enlighten his grave, and to make him join the prophets, the martyrs, and the good people…

“We appreciate him as a rich man living in KSA who left this luxurious life and moved to a hard life in mountains and caves. He helped his Afghan brethrens and participated in Afghan jihad effectively…

“I think that what the Americans claim about September 11th was a trick and a bait they accused Al-Qaeda of. All evidences and indications refer that the Americans are the ones who planned this matter, not the Afghans who have weak resources. The plot of 911 story was not tight. It should be reviewed closely and all parties should be listened to.”

The discussion is no longer online, but screenshots of it were saved by the blog Harry’s Place.

El-Helbawy is joined by Azad Ali, an activist with the group ‘Islamic Forum Europe’ and who has praised Osama bin Laden’s mentor, Abdullah Azzam. When the Mail on Sunday accused Ali of having endorsed the killing of British troops in Iraq, he tried to sue them for libel.

However, Justice Eady ruled that he:

“Was indeed… taking the position that the killing of American and British troops in Iraq would be justified.“

Eady declared that Ali’s case had about it “an absence of reality” and was bound to fail, so he threw it out.

Daud Abdullah came to prominence in 2009 after rowing with Hazel Blears, then Secretary of State for Communities and Local Government. During the Gaza crisis of that year, Abdullah signed a declaration endorsing violence against Israel and:

“The obligation of the Islamic Nation to regard everyone standing with the Zionist entity, whether countries, institutions or individuals, as providing a substantial contribution to the crimes and brutality of this entity; the position towards him is the same as towards this usurping entity.

“The obligation of the Islamic Nation to regard the sending of foreign warships into Muslim waters, claiming to control the borders and prevent the smuggling of arms to Gaza, as in effect a declaration of war, a new occupation, sinful aggression, and a clear violation of the sovereignty of the Nation, that must be rejected and fought by all means and ways.”

Abdullah signed his support for this declaration after Gordon Brown had stated that British naval units might be sent to the Israel/Palestine coast.

Blears said that these articles justified attacks both on Jews around the world and on British troops. She announced that she would therefore not be treating Abdullah and any organisation he was part of as though it represented British Muslims. Abdullah’s subsequent threat to sue her has never materialised.

Of course, just like the BNP and EDL, these individuals have a right to their opinions within the law. However, before members of the Left ally with them to fight anti-Muslim bigotry, they should ask whether doing so might be counter-productive.

A key anti-Muslim trope is that Islam is inherently extreme and therefore all Muslims hold extreme views.

Sharing a platform with, and thereby helping to raise the profile of, the extremely small minority of Muslims who are 9/11 truthers, who eulogise Osama bin Laden and/or who support attacks on British troops is therefore badly counter-productive.

Of course, it would be a different matter if this were a debate and Mehdi Hasan had an opportunity to challenge el-Helbawy’s views (with which he does not agree). This does not look likely to happen given the advertised topic of the event.

There is, however, another dimension to the ‘Enough Coalition’ event. Robert Lambert, a former policeman who now works at the Islamist-funded ‘European Muslim Research Centre’ at Exeter University, will also be speaking. His latest report, ‘Islamophobia and Anti-Muslim Hate Crime: UK Case Studies’ (pdf) does two main things.

On the one hand, it documents genuine and disturbing examples of anti-Muslim prejudice and violence. On the other, it uses allegations of Islamophobia to smear critics of Islamism.

Lambert’s report previously contained one section about politics in East London which was so libellous about Jim Fitzpatrick MP and various Labour Tower Hamlets councillors that Exeter University had it removed and issued an apology to them. In this way, Islamists and their allies use the concept of Islamophobia to argue that Islamists must not be criticised because doing so feeds the anti-Muslim atmosphere in the UK.

By appearing at events with prominent left-wing journalists and politicians, Islamists can then present themselves as part of the mainstream, despite their publicly stated views. This then further reinforces the idea that their critics are motivated by hatred of all Muslims, not perfectly rational concerns about their publicly-stated views.

The Muslim Brotherhood (in Arabic, Ikhwan al-Muslimeen‘), the world’s largest and oldest Islamist group, has even launched a website called ‘Ikhwanophobia‘ which argues that the Brotherhood’s critics are inspired by bigotry, not by rational disagreements with the organisations goals and beliefs.

The Left must no longer allow our proud history of anti-fascism to be hijacked in this way. Alliances with Islamists do nothing to help genuine victims of bigotry. All they do is strengthen the hands of extremists on the Islamist and racist far-right.