Ed Jacobs reports on the terrible trend of Christian persecution in post-revolutionary Egypt. 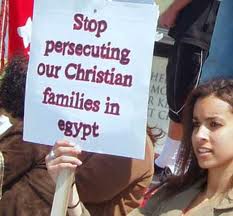 Speaking during his visit last week to Egypt, foreign secretary William Hague told reporters in a joint press conference with his Egyptian counterpart:

“The success of the Arab Spring will be judged very heavily by what happens here.”

Following events surrounding the departure of President Hosni Mubarak, hopes were high that it would mark the start of a genuine process of democratisation, not just in Egypt, but across the middle east.

At the time, Amr Moussa, secretary general of the Arab League, declared:

“Now is the moment to build a national consensus to move towards the future, and I believe the future – our future, Egyptian future – should be built on both democracy and reform.

“And I think this will be the case. I’m very optimistic about that future after the events of the last couple of weeks, and in particular today.”

Indeed, such was the sense of unity and optimism that Christians and Muslims were found to be working together in seeking a better future for their country.

As Anne Alexander of Cambridge University explained at the time:

“Making my way to Tahrir Square during the anti-Mubarak protests, a striking piece of graffiti caught my eye. Scrawled on the concrete pillar of a flyover was the symbol of a Muslim crescent embracing the Christian cross and the words: “We are all against the regime.”

“During the big “Day of Departure” protest in Tahrir Square last Friday, Coptic Christian protesters made a human chain around their Muslim brothers and sisters as they performed the noon prayers. A Christian Copt holds a sign: “From Muslim and Christian brothers, Leave Mubarak you coward.”

“Two days later, “Martyrs’ Sunday” was celebrated by Egyptians of both religions as an affirmation of national unity in struggle.”

And yet, despite the wave of optimism that covered Egypt at the time, events over the weekend have seen clashes between Muslims and Christians, leading to the burning down of St Mena’s church in the suburbs of Cairo and leaving 12 people dead.

Writing for the Telegraph, the paper’s reporter in Cario, Richard Spencer, explains:

“A large gang of Salafi Muslims – followers of a purist sect to which most Islamist terrorist groups are aligned – led the attack on St Mena’s, claiming a Christian woman who had converted to Islam to marry a Muslim was being held inside against her will.”

And the voices from those on the ground are telling harrowing stories and tales of the authorities failing to address the persecution being faced by many Christians across the country.

Speaking in Australia to ABC’s “PM” programme,  Hanan Ghabour, a counsellor and welfare worker with the Coptic community in Sydney, commented:

“Yesterday I was speaking to someone who served in the church in Egypt and they were saying you know please pray for us, we’re in deep trouble. Every day we hear a girl or a woman has been kidnapped…

“In Coptic marriage when a person commits adultery the marriage is broken. So when a woman gets raped if she tells her husband that she’s been raped there will be a huge split in the family.”

And Hossam Bahgat, executive director of the Egyptian Initiative for Personal Rights, explained:

“There is generally a sense of increased boldness of extremist elements in society that are attempting to intimidate Christians.

“They know that the police officers will not rush to use violence against them because of the hostility that the people on the streets generally feel towards the police.”

After the start of the year which was marked, as reported on Left Foot Forward, by the killings of 21 Coptic Christians in Alexandria, the latest round of violence should act as a stark warning. If, as William Hague concludes, Egypt is to be the litmus test for the success or otherwise of the on-going “Arab Spring” then religious freedom, particularly allowing Christians across the region to freely express and follow their beliefs, is essential.

The question therefore for the international community is whether it stays true to its rhetoric of democracy and addresses the erstwhile failure of the Egyptian authorities to properly clamp down on the attacks on Christian communities in the country. If not, then those across the region calling for a future of hope will question the resolve of the world’s so called “superpowers”.