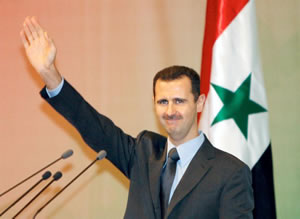 Syria’s internal conflict looks to have entered a new phase. Though the death toll is still lower than that of Egypt’s supposedly peaceful revolution – 750 casualties since mid-March, as opposed to Egypt’s 846 – the use of tanks and the central role of the military rather than police forces make this episode increasingly redolent of the 1982 Hama massacre.

Nonetheless, Bashar al-Assad will probably survive. In a fluid regional environment, and with limited information trickling out of Syria, making such prognoses is hazardous – but there are a few reasons for the regime’s likely resilience.

First, its security forces have remained predictably loyal and largely unified. The units that were intended for internal repression have functioned exactly as hoped. The army’s 4th division, commanded by the president’s brother Maher Assad, killed more than a hundred protesters in the southern city of Deraa.

Maher also commands the elite Republican Guard, a force comprised entirely of Alawites (the minority sect to which the Assad family belongs). Seventy per cent of the army’s professional soldiers are Alawites, along with 80 per cent of officers. Parts of the 5th and 9th Divisions do seem to have defected but, unlike in Egypt, the loyalists are numerically and militarily stronger.

Second, the regime is not collapsing from within. Though 230 Ba’ath Party members resigned in late April, the party’s membership exceeds two million. Those defecting were concentrated in the south, suggesting that the party has held together in other parts of the country. The core of the regime is bound together by family ties. Unlike in some autocratic states, no single member can likely survive without the broader network.

Third, the uprising has yet to penetrate either of Syria’s two largest cities: the capital city Damascus, and Aleppo. Both have seen protests, particularly in Damascus’s suburbs, but not in force. Egypt’s revolution unfolded with a single, potent focal point – Syria’s is more dispersed, shifting in response to the army’s attacks. In a number of other cities, like Homs, many segments of the population, and particularly less conservative middle class groups, are not backing the rebellion.

Fourth, and most importantly, the international community’s response has been divided, ambivalent, and faltering. The US State Department still insists Assad can make amends. This is predicated on the widespread feeling that he is, despite his use of extreme violence, a reformer at heart.

The US is debating whether to declare Assad’s rule illegitimate, but it has no appetite for further intervention (which, in the Syrian context, would be virtually impossible), and it still hopes to ‘win’ Syria away from Iran. The EU has imposed sanctions on 13 regime officials, including Maher Assad, but, remarkably, neither these nor the US sanctions affect the president himself. The US correctly recognises that its leverage in Syria is limited. Over the past decade, it has – in the course of declaring Syria a state sponsor of terrorism – played most of its cards.

Russia and China, both permanent members of the UN Security Council, have blocked British-led action to increase pressure on Damascus. Though they have repudiated any ‘responsibility to protect’ in this instance, it is worth noting that their aversion to interference or coercion is no different to US policy in Bahrain, which continues its own brutal crackdown.

Regional powers as disparate as Israel, Iran, Saudi Arabia, Turkey, Lebanon and Iraq are genuinely concerned with the turmoil that might result from civil conflict or a violent succession struggle. Syria is majority Sunni, and any Sunni regime that replaces that of Assad might escalate its support of Hezbollah, or intensify its claims for the Israeli-occupied Golan Heights, as a populist gesture. Though Turkey’s support for Assad has waned over the past several days, Turkish prime minister Erdogan is loath to jettison an alliance that he has spent years cultivating.

No such united stand is forthcoming, and none will coalesce in the next two weeks. In no other revolutionary country is there such a restrictive constellation of diplomatic forces.

Brian Whitaker may be correct to argue that “prospects for a return to the previous status quo are virtually nil”; but Bashar Assad’s willingness to pull out, quite literally, the big guns has probably ensured his regime’s medium-term survival.