A round-up of Serbian reaction to the arrest of Ratko Mladic and a look back at eyewitness accounts looking back of this evil man's atrocities. 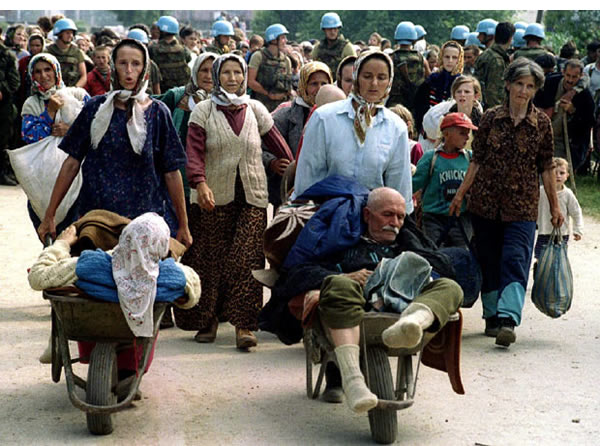 The capture of Ratko Mladic forces this continent to remember our sickening inaction throughout the Bosnian War of 1992-95, the stage of the worst atrocities Europe has seen since the World War Two. It also forces Serbia to a make a reckoning and break with this part of its history, while never forgetting what took place in its name, and the name of the Serbian people.

For those too young to have memories of the conflict and unaware of just how bloody and horrific it was, the Visegrad Genocide Memories shows the extent of the atrocities in just one area committed by the Republika Srpska under Mladic’s command.

The ethnic cleansing that took place at Srebrenica under Mladic’s command is well known. Videos are available at this site showing the events surrounding, and the moments leading up to, 8000 Bosniak men and boys being divided from their female relatives and loved ones and systematically murdered.

The seige of Sarajevo was also overseen by Mladic who, screamed “burn their brains” as his men pounded the civilian population with artillery fire. Janine di Giovanni’s ‘The Book of the Dead’ gives a heart wrenching eye witness account of life inside the city throughout the seige.

It is more than essential reading:

“Inside the city, which was surrounded by mountains, there was no water, electricity, heating, petrol, food or comforts.

“Packs of hungry wild dogs roamed the streets, picking up pieces of human flesh. Hundreds, sometimes thousands of artillery shells fell on the once-beautiful city on the river, which was smashed to pieces, and evil snipers perched on hillside mounts, taking aim at women and children running across the street.

“The soft flesh of knees and thighs was particularly vulnerable: easier to hit…

“As for the children who came of age during this siege, they learned to live with fear, to comfort their parents during artillery attacks, and to understand madness…

“There was nowhere that was safe, because living in Sarajevo was like being in a doll’s house with a giant perched above it, holding great boulders that he would drop on the house, squashing the people, just for fun.

“Some people decided to defy it, to stay inside for the entire siege, not to leave their reinforced apartments. But even they were not safe: one day, a stray bullet would fly through the window as they were trying to wash dishes with a few cups of water that they had stood in line for hours to get. And then they were dead.”

Mothers of Srebrenica Association President Hajra Čatić said in reaction to the arrest:

“After 16 years of waiting, this arrest comes as a relief to us, the victims’ families.”

“The Serbian authorities have ordered a ban on public gatherings in Belgrade as security was raised to the highest level in the entire country… Last night, some 700 dissatisfied citizens gathered for protests in Belgrade and Novi Sad…

“In Novi Sad, protesters tried to break in the Radio and Television of Vojvodina premises and those of the ruling Democratic Party…

“Meanwhile, the opposition Serb Radical Party (SRS) announced that they plan to hold a rally on Sunday in Belgrade, in protest of the arrest of Ratko Mladić.”

The popular Serbian tabloid Blic hailed the arrest, and as with most analysis and reporting from within Serbia they focused on the country’s future, particularly within the EU, rather than the past.

A Sebian student who claims to have worked alongside Mladic as a construction worker, told the newspaper that he “lives like a poor man and worked the simplest jobs”. The student said he even asked once if the man realised how similar the Mladic he looked.

“He was an ordinary physical worker. We worked together and I am still in shock. I cannot believe that Milorad Komadic is actually Ratko Mladic.”

6 Responses to “Mladic’s arrest: Background of his heinousness and reaction from Serbia”