The OECD is starting to come round to Labour’s view of Chancellor Osborne’s cuts: they are too fast and too deep; Matthew Pitt reports from Parliament. 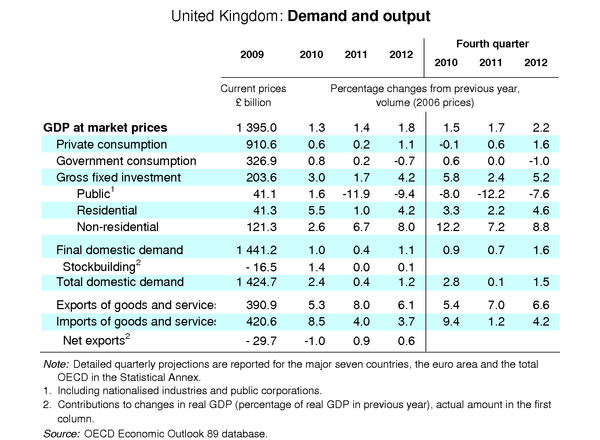 Just as President Obama failed to endorse the coalition’s deficit reduction plans today, the Organisation for Economic Co-operation and Development (OECD) is starting to come round to Labour’s view of chancellor Osborne’s cuts: they are too fast and too deep. The highly anticipated Economic Outlook, out today, warns that GDP growth figures for the UK are looking increasingly bleak.

After months of supporting the drastic and ruthless cuts, the OECD has had to admit they may be too much for the recovering economy.

On the same day as our hopes were dashed of an upward correction of Q1 economic growth, the chief economist of the OECD, Pier Carlo Padoan, warned the UK it may have to consider slowing down the pace of cuts if the UK economy continues to lag behind that of Germany, France and the aggregate of the eurozone.

This is especially worrying in light of the economy having flatlined over the last six months before the majority of cuts and tax rises set in. With no growth and a predicted continued rise in unemployment, the government will be spending more on benefits and will receive less in tax revenues as a result.

We are entering a devilish circle of low growth leading to higher borrowing, resulting in more cuts to meet the deficit target, which again brings about lower growth and so on.

“Slow growth and more people out of work and on benefits will make it harder to get the deficit down.”

Although the OECD still maintains its overall support for George Osborne’s fiscal consolidation, it is warning that he:

“…can slow down the pace over the next quarters if things turn out to be weaker than expected.”

Mr Osborne knows full well, however, that any gear change in his cuts programme will be seen by the public as the beginning of an alternative approach to the deficit – a Plan B.

Adding to Osborne’s woes is the expectation by the OECD that the Bank of England will have to increase interest rates by 50 basis points to 1 per cent towards the end of 2011 and then to 2.25 per cent in 2012 due to heightened inflation expectations. Being overly reliant on a loose monetary policy, the planned cuts will therefore have an increasing downside effect on the economy once borrowing costs for businesses and individuals rise.

Osborne’s allies, standing on the side of excessive cuts, are beginning to wobble in the midst of updated gloomy economic outlooks. It is not only him, however, that stands on shaky ground – it is also the future of our economy.

Perhaps he should therefore consider the analysis by the Institute for Fiscal Studies in its Green Budget for 2011, that Labour’s March 2010 budget under Alistair Darling would have returned the UK’s public finances to a sustainable position.

Admittedly, Labour still needs to propose what it would do in detail, but the right wing shrieks that there is no alternative are rapidly turning into a wimpy whisper.