Declan Gaffney finds it possible to "agree with Nick"... well, almost - there may be some agreement over Lib Dem opposition to George Osborne's regressive benefit cap. 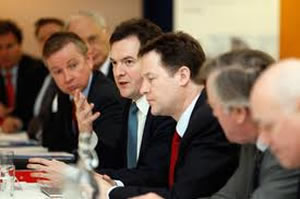 The Financial Times reports dissent within the coalition over the cap on benefits announced by George Osborne at last year’s Conservative party conference. Nick Clegg is said to be concerned that the policy “could have a heavy impact on large families, particularly those living in expensive areas such as London”.

It’s a while since Left Foot Forward has been able to say ‘we agree with Nick’, but in this case he is almost right.

The benefit cap is designed to penalise families with large numbers of children, because it is primarily child benefit and child tax credits which push the out-of-work incomes of some families up to and above the £500 a week at which benefits would be capped under the coalition’s welfare reform bill.

Eighty per cent of the 50,000 affected households have three or more children, facing average losses of £95 a week. Clegg is only almost right because high housing costs are not the main driver of the arbitrary effects of the cap – see below.

Given that the estimated savings from this policy are minimal (£240 million a year) it might seem that the cap is an obvious candidate for a post-referendum concession to the Lib Dems from Mr Osborne.

But as an aide to the chancellor is quoted as saying:

“It is extremely popular with the public.”

It is hard to see the chancellor willingly conceding a policy which resonates so strongly with public perceptions about welfare that even the opposition has held back from querying its rationale.

The popularity of the benefit cap arises from a basic misunderstanding which has been deliberately fostered by coalition ministers: that families on out of work benefits can have higher incomes than comparable working families.

As the Department for Work and Pensions told the FT:

“It is unacceptable that households on out of work benefits should receive a greater income from benefits than the average weekly wage for working families.”

The key word, of course, is ‘comparable’, and comparability is what the DWP’s statement is carefully crafted to evade by comparing the incomes of certain types of family while out of work with the average earnings of working households of whatever size and composition.

In fact it is virtually impossible for a household in which someone is working more than 16 hours a week to have a lower income than a similar out of work household with the same housing costs. Benefits and tax credits are designed to avoid this happening.

The exception, which coalition ministers have quite deceptively used to plant the idea that people are better off on benefits than in work, is where people are working less than 16 hours, as Working Tax Credit was designed to avoid incentivising working only a few hours. But for those working more than 16 hours, incomes are unambiguously higher in work.

The table below uses the DWP’s own tax/benefit model to exemplify this for the sort of large households who will be most affected by the benefit cap: couple and lone parent families are £63- £118 a week better off in work working for 16 hours at modest hourly wages. The table also shows the amounts of in-work benefits these families can receive, which are comfortably higher than the cap over this range of hourly earnings. 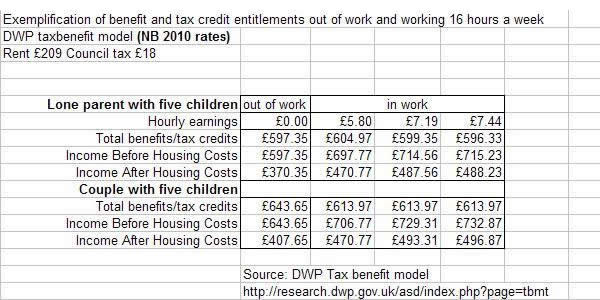 In the exemplification above, private sector rents of £209 a week are assumed but families with very low rents can still fall foul of the benefits cap if they have four or more children, as can be seen from the fact that an estimated 80% of the families affected are in social housing. This is because child benefit and child tax credit make the main contribution to pushing incomes above the cap. For a couple with five children, these entitlements, combined with income support for the parents, sum to £435.75 a week.

That means that in order to remain below the £500 a week cap, this seven-person household would need to be spending no more that £64.25 a week on rent and council tax. It is hard to imagine a more arbitrary basis on which benefit entitlements could be limited.

Thanks to tax credits and the minimum wage, there are very few circumstances under which households don’t see a serious gain in income from moving from worklessness into work: comparable households are not better off on benefits.

When Nick Clegg’s spokesperson tells the FT that welfare reform was “a challenge that Labour ducked spectacularly”, they show not only startling ignorance of what actually happened under Labour but the Lib Dems’ inability to say anything about welfare reform without leaning on a narrative of Labour failure.

Lib Dem concerns about the cap sit uneasily with their cheerful endorsement of the arguments underlying the policy – that benefit expenditure was ‘out of control’ under Labour , that this was due to large numbers of families having disproportionate entitlements and being better off on benefits than working and that this is ‘unfair to taxpayers’.

It is not until Lib Dems start challenging these claims that their critical stance will merit more than one and half cheers.