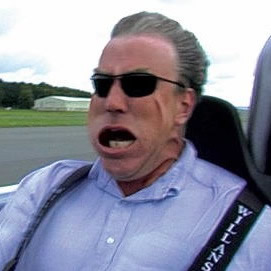 Former regressive of the week, Jeremy Clarkson, has spent far too much of his life around petrol fumes. His nutty gaze has risen north from Mexico to the incumbent of the oval office, deciding, as any cutting edge journalist might, now is the time to investigate the circumstances of Barack Obama’s birth.

“He (Obama) has not, however, given a reason for refusing to reveal it earlier. Maybe it’s because the ink wasn’t dry.”

The insult added to this injury to the collective intelligence is that some of these people are not wild eyed hate-preachers or banjo-playing members of a depleted gene pool in the rocky mountains; some of these people, like Clarkson, are rich “celebrities” who, not content with TV, demand an audience in print or a public office with which to humiliate themselves.

In America this role normally falls to Saran Palin, but recently Donald Trump has bravely stepped into the breach.

One could always use logic, rationality, DNA and documented evidence but it would be of little use. You can’t use evidence to refute what someone believes without any evidence, or despite the evidence. Obama has the right tactic, humour is usually the best strategy:

So to follow Clarkson’s logic: you are not presumed innocent until proven guilty. In fact, you might well be guilty as soon as someone makes an accusation, and of course any accusation, no matter how unreasonable, must be answered.

So we would like to pose a few similarly challenging questions to Clarkson himself; we do of course expect prompt answers with proof, to allay any suspicions:

1. Are you an alien and/or shape shifting lizard?

2. Were you behind the grassy knoll?

3. Have you ever been to Whitechapel and if so can you account for your movements around the second half of the 19th century?

Most importantly of all, why haven’t you left yet?