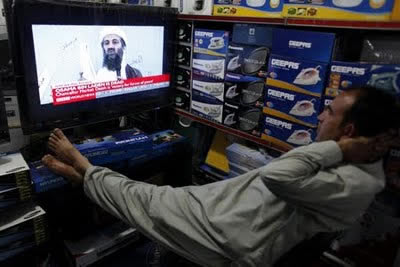 While the reaction to the assasination of Osama Bin Laden has been positive in the West, there has been a much more varied response from those in Muslim countries. Pakistani blogger Armegeddon Ali, for example, working under the title “Hell called, your place is reserved” oozed cynicism, declaring that ‘the world now has one less A-Quality, Fanatic, A-hole to deal with’ but had little love for the American president or the Pakistani premier either. He imagined a telephone call between President Obama and the Pakistani President Asif Ali Zadari thus, throwing in conspiracy theory for good measure:

“Obama: Yo Zardari, what up?
Zardari: Nuffin much, just chillin, relaxin, corruptin
Obama: Dude, I called for some serious shit, we found Bin Laden, he’s in Pakistan
Zardari: OMG Really, you aren’t fu**ing with me, are you?
Obama: No man I am serious, we found him dead in Afghanistan, bought his body to Pakistan and now we are about to launch an operation to kill his dead body. You down with that?
Zardari: Man, why did you kill him, he was the reason we was getting all the security, protocol and everything.”

Over at the the Arabist, Cairo journalist Issandr El Amrani downplayed the significance of Bin Laden in the Arab world:

“For a time, Bin Laden had a superficial role to play as a symbol of resistance to American or Western imperialism… But the sentiment Bin Laden evokes today is probably indifference.

The radical-theological option that Bin Laden represented as a solution to the state of the Arab world has long been discredited. It was discredited before it even began, in that it was a result of the failure of the violent Islamist movements of the 1970s-1990s era…

The trends that are winning out in recent years are the radical-resistance ideologies of Hizbullah (and to a lesser degree Hamas) and the radical-centrist view that fueled the [recent] uprisings. And in the longer-run, it is the latter rather than the former that have a vision of societies that are not constantly mobilized towards an external (or internal) enemy. The views of Hamas and Hizbullah address the problems of war and occupation, but not those of these societies beyond those problems. Bin Laden never really addressed either, his fight was for the glory of the impossible and in the hereafter.”

Nasser Arrabyee, a Yemeni journalist, reports on mixed reactions from a country that analysts are describing as an increasingly important hub for terrorism. According to Arrabyee, those mourning Bin Laden have been much more vociforous than those celebrating:

“Those young people who established the face-book pages “All of us are Osama Bin Laden” are not necessarily religious or sympathizers of Al Qaeda, but they are angry from Obama administration for supporting [Yemenite President] Saleh… There are many Yemenis who were extremely happy to hear the news of the death of Osama bin Laden this morning, but they were not as brave as those who were sad and angry to express their feelings and views in such a conservative society …. Those who were happy would prefer only to whisper, looking right and left, while expressing their hate and refusal to Bin Laden and his sympathizers.

“‘I’m very happy to hear such a news, it’s a victory over terrorism and extremism, and it’s actually a victory for Islam, because Bin Laden presented Islam in a very bad image to the world,” Said Essam. “Wherever I go in the world, I can not say I’m Muslim, if I say I’m Muslim people only imagine Bin Laden, and remember his killings of innocents and destruction of every beautiful thing,” Said Essam who travelled to many places in the world including US.”

Meanwhile in Afghanistan, which has experienced a decade of war following 9/11, Soroush Rasouli at The University Campus blog painted a scene of exhaustion, rather than jubilation or anger, declaring ‘Osama Down, not so exciting’:

“Here, many are happy, and many, who are sad, do not express themselves though. At lunch time, in addition to meals, was Osama’s death hot on the table. Some are making jokes about it, while some trying to seriously analyze it. And, some even do not care about it. Or, I better to say they pretend they don’t care about it.

“The good thing about this incident I think is this that not as we expected people are too excited, from sadness or joy. They are too experienced in passing such incidents in their lives. They are trying to be calm and see what will happen next.”

Inevitably, some blogs are calling out ‘spin’ on what they perceive to be the official story. The Angry Arab, does not believe that the intention of the mission was to assasinate Bin Laden:

“The U.S. special forces team that hunted down Osama bin Laden was under orders to kill the al Qaeda mastermind, not capture him, a U.S. national security official told Reuters.”  This is an obvious lie and for obvious reason. I am certain that the orders were to capture him alive: his capture alive would have been far more humiliating for him, just as the capture of Saddam. I hate those propaganda spins after the fact.”

Meanwhile, Juan Cole at Informed Comment, based at the University of Michigan says that the reality is more complicated than “the Pakistanis didn’t know”.

“The US story that the Pakistanis were not given prior notice of the operation is contradicted by the Pakistani news channel Geo, which says that Pakistani troops and plainsclothesmen helped cordon off the compound in Abbotabad. CNN is pointing out that US helicopters could not have flown so far into Pakistan from Afghanistan without tripping Pakistani radar. My guess is that the US agreed to shield the government of Prime Minister Yousuf Raza Gilani and President Asaf Ali Zardari from al-Qaeda reprisals by putting out the story that the operation against Bin Laden was solely a US one. And it may be that suspect elements of the Pakistani elite, such as the Inter-Services Intelligence, were kept out the the loop because it was feared they might have ties to Bin Laden and might tip him off.”