A leading economic think tank has warned that falling growth means government will miss its deficit reduction target. They predict growth in 2011 of 1.4%. 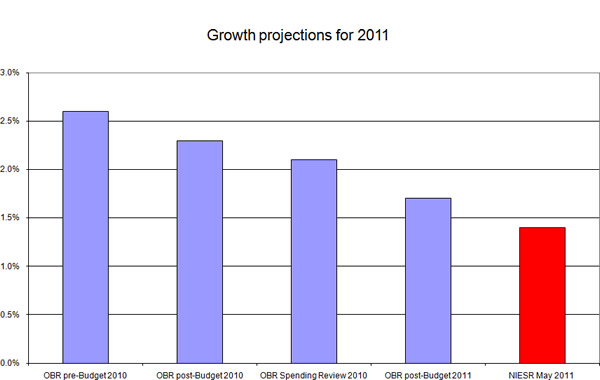 A respected and independent think tank has predicted that growth in 2011 will be as low as 1.4 per cent – almost half the level originally predicted by the Office of Budget Responsibility in June 2010. The National Institute of Economic and Social Research predict that inflation will be up in 2011, tax revenues will be down, and the government will miss its deficit reduction target to balance the cyclically-adjusted current budget by 2015–16.

A press release from NIESR outlines their prediction that:

“Not until 2013 will the economy grow faster than its trend rate of 2.1 per cent. Growth this year will be constrained not just by the government’s spending cuts but by the squeeze on households from higher taxes and rising inflation. Consumer price inflation will reach 4.5 per cent this year, up from 3.3 per cent in 2010″

The chart below compares NIESR’s current estimate with successive predictions for 2011 growth by the Office for Budget Responsibility. The OBR have revised down the projection for 2011 growth three times since they published their first estimate before the Budget in June 2010.

The OBR were off track again last week when growth for the first quarter of 2011 came in at 0.5% – below the 0.8% they had predicted after the Budget. And there was more gloomy economic news this week with both construction and manufacturing slowing sharply in April. As respected economic commentators such as Martin Wolf and Robert Skidelsky have warned, lower growth impacts the Government’s ability to close the deficit. In line with this analysis, NIESR’s press release predicts that:

“The weak recovery will feed through to lower tax revenues. That will mean that even if the spending plans are met over the next four years, public sector net borrowing will fall only to 3.6 per cent of GDP in 2015–16 rather than the 1.5 per cent projected by the Office for Budget Responsibility. Likewise, the current budget will then run a deficit of 2.2 per cent of GDP compared with the OBR’s surplus of 0.2 per cent. We do not expect the government to meet its target to balance the cyclically-adjusted current budget by 2015–16.”

Angela Eagle MP, Labour’s Shadow Chief Secretary to the Treasury, said in response to the latest forecast, “NIESR is right to warn, as Labour has, that slower growth will mean lower tax revenues and so make it harder to get the deficit down.”