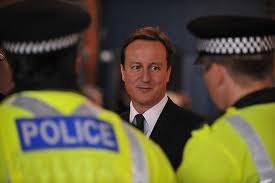 David Cameron is having a hard time of it in PMQs of late. The poor man can’t seem to get a grasp of the figures or get his facts straight or even remember what his politics are and stick to them, which led last week to him insulting people.

Luckily Ed Miliband is there to remind the prime minister of what he has actually said:

“Any cabinet minister, if we win the election, who comes to me and says ‘here are my plans and they involve front line reductions’ will be sent back to their department to go away and think again.”

Miliband started his attack today with a simple question:

Miliband: “Can the prime minister tell us, as a result of his 20 per cent cuts to police budgets, how many experienced police officers are being forcibly retired?”

Cameron: “The decisions about police officer numbers will depend on decision made by individual chief constables in individual parts of the country but the point I would make is this: that we can see in case after case there are far too many police officers in back office jobs doing paperwork carrying out corporate development work who should be on the front line.”

Police officers like the ones in Warwickshire police authority, where 150 officers have been taken off the ‘frontline’ to cover the ‘back-office’ work done by staff who have been made redundant by the police budget cuts.

Miliband: “I don’t know whether he doesn’t know the answer to the question or he just chooses not to answer it, let me tell him the answer; 2100 experienced police officers with over 30 years of experience are being forcibly retired…”

Ed: “He’s the guy who came along and said not 12 per cent cuts to make efficiency savings but 20 per cent cuts in the police budget. It’s his choice why doesn’t he defend it?”

Miliband was referring to the recommendations made by the Her Majesty’s Inspectorate of Constabulary, in a report called “Policing in an age of austerity”.

The report stated that anything above 12 per cent efficiency savings would risk compromising the service. Miliband then went on to remind Cameron of his comments, made only a year ago, about protecting the frontline and asked what the he had said to the home secretary.

All in all, Miliband summed up Cameron’s performance when he said:

“It’s what we have come to expect of this prime minister.., hazy on the facts and unable to give a straight answer to a straight question.”

Left Foot Forward have commented before on the dangers of Cameron’s police service cuts and reported on the mapping of how the cuts effect each area.