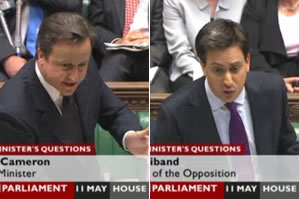 Ed Miliband continued his line of attack over the NHS at Prime Minister’s Questions (PMQs) today, telling the prime minister he could not escape his share of blame for the health bill fiasco. He reminded Cameron that he said he was “involved in designing these changes way back into opposition” with the embattled health secretary Andrew Lansley – whose absense did not go unnoticed.

“Can you therefore confirm that the failing NHS plans are not the health secretary’s fault, they are yours?”

Cameron tried to rally by protesting that waiting times had not fallen and funding had been increased for the NHS; debatable points which the Labour front bench refused to accept. Cameron then clutched at some very odd straws.

He fell back on the word of 42 GPs who had written to the Daily Telegraph to support the government plans. The group, led by Freemason enthusiast Dr Jonathan Munday, cautioned the government “of the danger of confusing and diluting the responsibility for effecting change in any amendments to the current proposals”.

They may be disappointed to note that Cameron again promised “significant and substantial changes” to the bill.

This gave Ed Miliband the chance to congratulate the prime minister on receiving the support of 42 GPs before falling back on the support of 42,000 GPs himself, in the form of the Royal College of GPs.

“The Royal College of GPs – representing 42,000 GPs – said on Monday, Andrew Lansley’s legislation will fragment patient care and cause irreparable damage to the core values of the NHS…

“Nobody should be fooled. This letter, led by an ex-Conservative councillor, is part of the Tory spin operation to save the Health Bill. Those who have signed the letter are at odds with mainstream doctors, nurses and patients who have serious concerns about the Government’s NHS plans.”

Cameron, who has a history of “quoting” Mr Healey, once more referred to the shadow health secretary as saying the general aims of the reforms were sound. This is the first half of a sentence Mr Healey said on Monday’s opposition debate to the coalition’s bill.

Healey went on to say:

“There is nothing wrong with the general aims of the changes, but what the government are doing is different from what they are saying. In one third of the legislation, they are not setting up GP consortia or reducing bureaucracy in the NHS, but setting up the NHS as a full-blown market.

“That is the wrong prescription for our NHS, and it is patients who will suffer.”

Such selective hearing does not bode well for the “listening exercise” the government is currently embarking on.

But while they are at least going through the motions, the government may be interested in the words of Phil Gray, chief executive of the The Chartered Society of Physiotherapy (CSP), a professional, educational and trade union body representing 50,000 workers.

In response to the Daily Telegraph GP letter, he said:

“The GPs offer absolutely no evidence to back up their claim that the government’s proposed reforms will benefit older and vulnerable patients in particular. In fact, there is strong evidence to the contrary – that open competition for health services can drive down quality of care and cause a race to the bottom on price…

“It is likely that older or vulnerable people will be worst affected, contrary to what the GPs claim this morning. Indeed, rationing of NHS services is already affecting physiotherapy patients with long-term conditions such as multiple sclerosis and asthma.”

The CSP states it has “clear evidence of any willing provider already damaging patient care”, citing the case study of one area of Nottingham where:

• Patients visiting their GP for physiotherapy services are now turned away and told to come back again in six weeks’ time if they are still in pain;

• Only after the second visit can patients be referred to a physio – but even then they will get only two sessions (both of which might only be advice, rather than treatment);

• After just two sessions of physiotherapy, patients face a choice: stump up for private care, go for secondary care at a hospital, or simply put up with the pain.