Dominic Browne asks whether Andrew Lansley will be scapegoated by David Cameron and suggests him being left in the job might work better for the left. 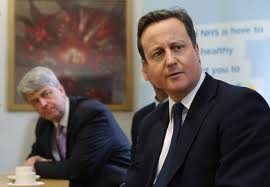 Some might argue it’s stating the obvious: a health secretary who received a vote of no-confidence from 99 per cent of the Royal College of Nursing, and a rejection of the flag-ship NHS reforms he spent seven years working on, by the British Medical Association, is in danger of losing his job.

The obvious is not always the inevitable in politics but calls for Andrew Lansley to go turned to rumours and speculation, and now have become that most ominous of understatements – ‘talk’.

The Financial Times writing yesterday under the headline: “Meeting prompts talk of sidelining Lansley” reported that:

“Health experts have been called in for a breakfast meeting with Paul Bate, David Cameron’s new special adviser on healthcare, prompting fresh speculation on Tuesday that Andrew Lansley, the health secretary, is being sidelined.”

The experts attending the meeting don’t at first glance provide any comfort to Lansley:

“Sir Ian(Carruthers) is understood to have reservations about the government’s plans.

“Others expected to be present include Sir Robert Naylor, chief executive of University College London Hospitals, who warned Mr Cameron before Mr Lansley’s white paper of the dangers of having purely GP-led commissioning.”

David Cameron has done his best to let department heads take the blame for the u-turns and failures of his government such as in the forests debacle, or when William Hague was “forced to shoulder the blame for mishaps in the Foreign Office”.

Lansley has already apologised for his part in the health bill failures and been subsequently “humiliated” by Cameron who billed the problem as one of “charging ahead” with the reforms instead of listening.

In light of this and the difficult relationship the Conservatives have with the British public over the NHS, Cameron might make Lansley a scapegoat. This would be humiliating in itself and would have to accompany some major compromises on the health bill. The best outcome for progressives would be for the unpopular Lansley to retain his job, and the healthcare bill to be defeated outright.

Lansley has become a liability and the bill has already lost the support of Liberal Democrats. Tomorrow’s election results may well give the Lib Dems even more reason to retreat back to their base and disassociate themselves from the Tories.

24 Responses to “Will David Cameron make Lansley a scapegoat, and will it work?”