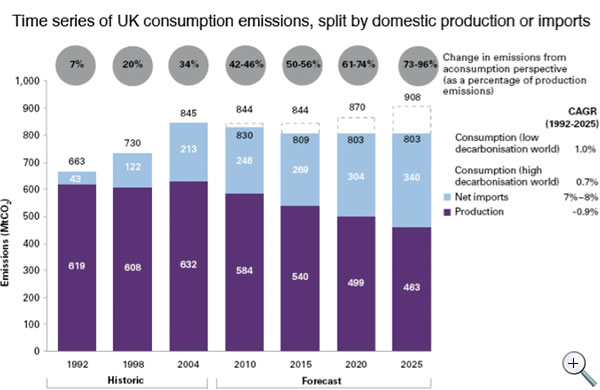 The figures, shown in the graph below and available for download here, have been calculated by including emissions embodied in the goods and services that the UK imports – often called ‘outsourced emissions’ – and adding these to the official tally of domestic emissions.

The fresh analysis comes at a crucial time for climate policy in the UK, as the Government vacillates over whether to accept recommendations from the independent Committee on Climate Change to set a fourth carbon budget for the period 2022-2027.

Business secretary Vince Cable, chancellor George Osborne and Treasury civil servants are known to be opposed to the CCC’s recommendations, arguing that it would put the UK at a competitive disadvantage to other countries.

But the new data unveiled by the government-sponsored Carbon Trust shows that, by 2025, the UK’s total emissions could at best be flatlining and at worst be higher than they are today – even if targets for domestic emissions reduction are met – because the savings will be cancelled out by rising consumption of imports.

If the UK is to compensate for this and convincingly demonstrate that it is on the path to a low-carbon transition, accepting the need for tough and binding emissions targets into the 2020s is an absolute necessity.

The findings also demonstrate that it is right and proper for the UK to be taking a lead in committing to deep emissions cuts into the next decade, as the UK benefits particularly from outsourced emissions.

Thirty four per cent of the UK’s current carbon footprint is ‘hidden’, with such emissions allocated instead to countries of manufacture like China and India. The percentage is lower for many other countries, including Germany (29%), Japan (19%) and the USA (13%).

This convenient trend towards outsourcing emissions is giving the UK a free lunch pass when it comes to meeting our climate change obligations.

As ministerial briefings obtained recently by NGO Public Interest Research Centre under the Freedom of Information Act have revealed, the government is well aware of the problem of outsourced emissions, but has thus far failed to act.

“Increased emissions from UK consumption could cancel out the progress that we have made in reducing domestic carbon emissions.”

“Government policy has much less leverage over emissions that occur abroad.”

Though it also admits:

“Nevertheless, we recognise that we do have a certain amount of control over emissions from abroad, as this is where many of our products come from.

“Consumer demand can be a powerful influence on manufacturers… by purchasing these products, we are contributing to that energy consumption.”

Furthermore, the CCC’s fourth carbon budget report recommends that the government investigate outsourced emissions further, and it has asked the government to give it the mandate to carry out an inquiry. Yet the government has repeatedly refused to do so, first claiming the CCC is “too busy” to conduct the work, and later trying to put off the decision until after the Copenhagen summit.

When climate minister Greg Barker was asked whether he would mandate the CCC to investigate in a Parliamentary Question earlier this year, he replied:

“I have not made a request.”

However, Defra have recently quietly let a contract to produce an ‘embedded emissions indicator’ for the UK for the next five years, but are understood to be reluctant to publish the data alongside the official national emissions inventory, for fear of embarrassing the government.

When it is released annually, it is likely to show two sharply diverging trends: a gradual reduction in domestic emissions, but a continuing rise in emissions from total consumption.