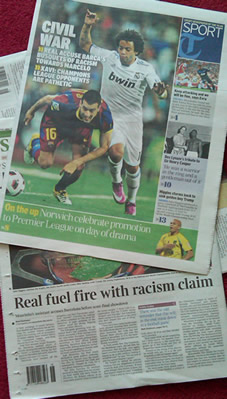 The eyes of the football world will be on Camp Nou tonight to witness Barcelona’s likely stroll to a third Champions League final in six years, with Real Madrid needing a minor miracle to prevent them reaching Wembley three-and-a-half weeks hence. The game, however, has been overshadowed by accusations of racism, with Barca midfielder Sergio Busquets accused of calling Real left back Marcelo a “mono” – monkey.

“[UEFA] is an organisation that has T-shirts saying Respect and Fair Play, but there’s going to be players on the pitch [tonight] who don’t respect this sort of thing.

“There have been racist insults made while covering their mouths. We’d like those players not to be on the pitch.”

“I know these kind of players, all of them. They are an example of professionalism, of honesty. They love the values of the sport. They know we play for the rest of the world. Of course they can make mistakes but as a human, they are an example as a player of Barcelona, as players of Spain…

“We would take action [if the racism is proven]… We would be very upset. But if an opponent makes allegation, Uefa has to decide.”

Such allegations, however, are not confined to the rest of Europe. Here, though at nothing like the levels seen in the past, racism, prejudice, bigotry still exist. Admittedly, not on the pitch, not amongst players or coaching staff, but in the stands, among more fans than we’d care to admit. It’s still there, and still not stamped out. Death threats. Anti-Semitism. Homophobia. Even parcel bombs.

Indeed, the question of whether football is “the last bastion of prejudice” was debated on Nicky Campbell’s “Big Questions” show on the BBC at the weekend; here’s an extract:

It followed the launch of “The Y-Word”, a film made by David Baddiel and his brother, at Stamford Bridge ahead of the Chelsea-Spurs clash on Saturday night. As Baddiel wrote in the Standard last week:

“The film, which asks football fans to think twice before chanting the word Y*d or Y*ddo, is not directed principally at Spurs fans. It was sparked by the behaviour of a Chelsea fan, who, sitting a few seats behind me and Ivor, two years ago upgraded the chant – regularly heard at Stamford Bridge whenever anything Spurs-related comes up – to a more pointed one of “F**k the f**king Y**s! F**k the f**king Jews!”

“The only fans shown in the film chanting the Y-word are Chelsea and Arsenal ones; the fans shown extemporising from Y*ddo into a song celebrating Auschwitz are Chelsea ones. This is important, as the debate seems to have got mired into being just about Tottenham fans. The chant, and associated anti-Semitic abuse, exists far beyond White Hart Lane, at the above-mentioned clubs, at Millwall, at West Ham, even at Ajax…

“Most Spurs supporters are not in fact Jewish: the club’s “Jewishness” is just a historical association with the area. It’s doubtful that there are more than five per cent actual Jews in the ground at home games (only 0.4 per cent of the UK is Jewish, so five per cent is way above average). So the argument, “but it’s just like Snoop Doggy Dogg using the N-Word” does not apply to most Spurs fans.

“The equivalent case would be a club in Brixton made up mainly of white fans adopting the N-word as their badge of honour and chanting “N****r” and “N*g Army”. This I think would be stopped fairly quickly. The thing to remember about Y*d is: it’s a race-hate word. It was daubed across the East End by Oswald Mosley’s Blackshirts.

“The only possible reason why a culture which has tried to dismiss other race-hate words to the margins of language would consider it acceptable is if the racism of which it is a part is somehow less offensive, somehow less significant, than other racism. This is actually what the normalisation of the word at football has led to.

“It might seem strange that the fan at Chelsea could’ve shouted “F**k the Y*ds!” without a steward intervening: racist abuse at football grounds is supposed to lead to an immediate ban.”

“Anti-semitism is the acceptable face of football racism… Think back: when was the last time you heard a terrace chant sung en masse that made disparaging reference to the physical characteristics of an ethnic minority before concluding with a similarly spiteful kicker. ‘F***ing black!’, maybe. Or f***ing P**i!’? Or f***ing anyone?

“Chances are that you won’t have done for many, many years. Or, depending on your age, at all. Thanks to the utterly commendable work by high-profile anti-racism campaigners and organisations like Kick It Out, even the most wrong-headed of terrace racists have cottoned on to the fact that it’s no longer acceptable to abuse others for the colour of their skin. Their religious views, though? Well, that sees to be an entirely different ball game…

“Thankfully the days in which [Spurs] fans – Jews and gentiles alike – were regularly regaled with the vilest of chants centred around Concentration Camps, such as ’70s hit ‘Spurs are on their way to Belsen’, or greeted with banks of opposing fans simulating the sound of gas being released, are receding into history.

“Again, even the most virulent anti-semites realise that brazen references to Nazism are now terminally taboo, and It’s been some years since I was caught up in a West Ham crowd celebrating a win over Spurs by adapting the words of ‘Singing The Blues’ to ‘Gassing the Jews’.

“It would be wrong to think that anti-semitism has somehow been eradicated from our football grounds, or driven underground, though. If anything, the success in combatting other forms of terrace racism have made anti-semitism even more prevalent. The ‘Y-word’, as Kick It Out’s current campaign explains , has become a common adjective of abuse.”

In addition to the Busquets-Marcelo allegations and the anti-Celtic bigotry, the past week has also seen the specter of racism return to French football, with the Fédération Française de Football (FFF), suspending national technical director Francois Blaquart amid claims of a secret racial quota for trainees. Senior FFF members are reported to have secretly approved limiting the number of black and Arab players to 30% from the age of 12-13.

“Only barely emerging from the embarrassment at last year’s world cup in South Africa, France’s football federation is now embroiled in another row, this time over racism. But defenders of French football’s managing body say that reporting of this row has been one-sided.

“At last year’s World Cup, for example, there were nine players on other sides who had previously played for France. This is the tendency that the federation wants to limit. But by letting discussion at this meeting run into broader stereotypes, about big physical black players versus small skilful white ones, it has strayed into very dangerous territory.”

Russia, who beat England in the battle to host the 2018 World Cup, is another country blighted by bigotry, with Zenit St Petersburg’s fans refusing to allow their manager to sign a black player and racist banners displayed unmolested at a Lokomotiv Moscow game earlier this season.

Home and away, the problems persist. For all the sentiment, the FA, UEFA and FIFA have so far failed to act decisively to tackle prejudice. Players, clubs, even countries may need to be banned, not merely fined, to drive the message home and impress upon the perpetrators the seriousness of their offences. If even Barcelona, playing some of the most beautiful football the beautiful game has ever seen, if even Barca can fall prey to racism, something has gone seriously wrong.