The British people like the Monarchy. get used to it, and fight that battles that matter. 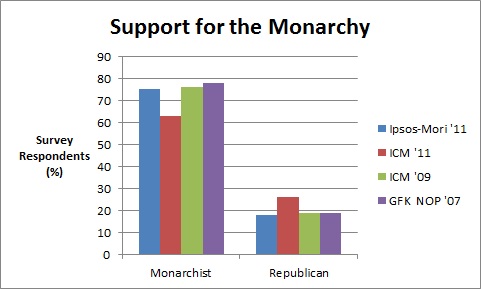 TweetShareWhatsAppMail
Is Sunder Katwala right when he says:

“British Republicanism is perhaps the least successful political project of my lifetime.”?

While we have recently seen such pie-in-the-sky policies as nationalisation of the banks enacted, and Conservatives quoting Polly Toynbee on equality, I would still reserve the title for efforts to get the UK out of the EU – given the vast reserves of wealth and media propaganda put into the struggle.
But, given that there have been republicans around in this country since before this country was a country, the  numbers are staggering. Four recent surveys point to solid support for the Monarchy:
While there are variations in the questioning between the Ipsos-Mori poll (2011), the ICM polls (2011 and 2009) and the GFK NOP (2007), the “monarchist answer” is given by between 63 and 78 per cent, while the “republican answer” is given by between 18 per cent. These figures have barely moved in more than 15 years.
Monarchy is impossible to square with belief in equality of outcome, opportunity or capabilities.  And, as official royal powers are passed de facto to the Prime Minister, there is concern for what Tony Benn called the ‘Penumbra of power”. But, in a wierd way, it works.
There are problems that progressives must face that affect people more directly, and something can be done about. We have welfare reform being carried out by a ministerial team that plays up to the worst prejudices of the tabloid press. A health reform, concocted by political elites in collaboration with think tanks funded by some of the American private health care companies that opposed President Obama’s healthcare reforms, that will let free market dogma run riot within the NHS.  And the imminent reversal of any progress on child poverty made over recent years.
So put your feet up, put a union jack paper hat on your head and enjoy the show. And when the royal wedding’s done and dusted, fight the battles that matter.

40 Responses to “Verdict of the British people: “Long to reign over us””