Dan Whittle investigates the exclusive club memberships of Tory MPs, finding around a quarter of are declared members of London’s Gentlemen’s clubs; in it together?! 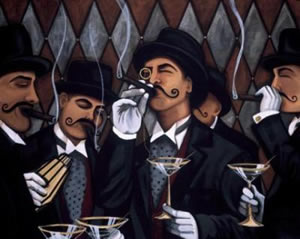 Dan Whittle is a member of the Labour party; he has investigated the exclusive club memberships of Conservative MPs

I’ve compiled a list (xls) for Left Foot Forward which for the first time reveals that around a quarter of Tory MPs are declared members of London’s Gentlemen’s clubs. With membership fees beyond the reach of ordinary Britons, the East India, Garrick and Carlton are some of the places Conservative politicians most like to escape the Big Society to join high society.

Sixty eight Tory MPs are declared members of 36 London clubs with bizarre names and rituals such as Pratt’s – an aristocratic club at which all staff members are referred to as ‘George’ to avoid the chore of having to remember their names.

And at least 10 of the clubs Tory MPs belong to don’t allow women.

They boast of access to private libraries, art galleries and swimming pools for members to enjoy, before they venture back to their constituencies to tell the voters why it is essential that local councils are denied funding so that everyone can enjoy these same services.

Eric Pickles, the Secretary of State in charge of cutting councils is one of the 27 Tory MPs eligible to enjoy the library at the Carlton, a club which boasts it is the “the oldest, most elite, and most important of all Conservative clubs”. Membership is over £1k (£1,140) per year – but you can bet the Carlton library does not receive as many visits as any of the scores under threat in Britain.

Culture cuts won’t be an issue for members of the Garrick. Its five Tory MP members include Ken Clarke and Dominic Grieve, and the sub of £1,000 per year gives access to more than 1,000 works of art.

Cuts to council leisure centres will be no problem to the six Conservative MPs who are members of the Royal Automobile Club which provides access to two 18-hole golf courses, gymanasiums, squash and tennis, “stunning” swimming pools and a Turkish Bath. Whatever the cuts to sport, David Willetts and Edward Garnier will still be able to enjoy tennis, croquet, cricket, bowls, golf, squash and swimming at the Hurlingham Club.

But perhaps no Tory MP enjoys the club lifestyle more than William Hague, who finds time to keep up his membership of six: Beefsteak, Carlton, Buck’s, Pratt’s, Budokwai and Mark’s. Close behind is Nicholas Soames MP with membership of Pratt’s, White’s and Turf; and Brooks Newmark – a member of Beefsteak, Boodle’s, Cresta and White’s.

David Cameron, famously a member of the the Bullingdon Club at Oxford University now reportedly continues to visit White’s, which he was a member of until embarrassment forced him to leave in 2008. Six of his Parliamentary colleagues are still members.

London’s clubs are a part of the capital’s history and character – but it says something that so many Conservatives aspire to spend their free time in a socially exclusive time warp.

It is a reminder that this is a party in denial about its true identity; by day seemingly striving for modernism, at night retreating to the privilege and comfort of an era in which services were accessible only to those who could afford them.

When 250 Sure Start centres are expected to close, when libraries and local bus services are under threat, and when families’ tax credits and child benefit are being cut back it is a level of privilege ordinary Britain will find distasteful. Fortunately these high end clubs often allow their members to bring along guests – so when the local library or swimming pool is to shut, ask the nearest Tory MP if you can be ‘in it together’ with him at his club.

38 Responses to “Revealed: The exclusive club memberships of Tory MPs”