Three weeks from the referendum on the alternative vote, Dominic Browne reports on the extent to which the NO to AV campaign is funded and run by Tories. 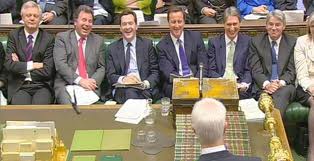 In their publicity material they describes themselves as a “cross-party” campaign, concerned that changing the voting system”would undermine confidence in our electoral process…”; however, “NO to AV” receive 99 per cent of their declared donations from Tory donors, who have given a staggering £28 million to the Conservative party and a further £10.6m in loans.

Also for a campaign worried about public confidence in the electoral process, they show a remarkable lack of concern when it comes to the damage their donors have done to confidence in so many fields of public life.

To take a few examples:

City Index Limited, of which Spencer is a majority shareholder, was fined £490,000 by the Financial Services Authority in 2010. And according to the Daily Mail, Spencer’s firm “advised councils hit by Iceland collapse”.

Mr Nash is the owner of private healthcare provider Care UK. He donated
£21,000 to Andrew Lansley. The Times reported (£) he “would be well placed to benefit from a Conservative promise to make it easier for private providers to perform more NHS work”.

Mr Wood was branded “unreliable”, and motivated only by “animus” by a High Court judge. As Left Foot Forward has previously reported, this is a man who donated £500,000 to the Tory party.

In 1996 Lord Kirkham’s knighthood was reportedly described by No2AV
patron John Prescott as “the crudest example yet of honours given for
financial services to the Tory party”.

Also, talking of services to the Tory party, John Prescott may be interested to know that the Labour No to AV campaign have hired William Norton as the campaign agent whose name is on all their election material as their “responsible person”; i.e. he is held accountable should any rules be broken.

Mr Norton is not only a Reddich Conservative councillor, but also the man who defeated Mr Prescott’s plans for a North East Regional Assembly in the referendum in 2004.

The above examples are but the tip of the iceberg in illustrating just how “cross party” the No2AV campaign really is.

• The AV referendum takes place in just under three weeks’ time, on Thursday, May 5th.

The No campaign got in touch after this blog was posted to outline that William Norton is not the Labour No to AV’s campaign agent. They say,”He is on the website, because that was built by NO to AV – but on all Labour NO to AV literature Joan Ryan, former Vice Chair of the Labour Party, is the person responsible.” We are happy to correct the record. The substantive point of the article remains the same.