By Dr Robert Ford and Dr Matthew Goodwin look at the real threat UKIP pose to the three main parties in next month's local elections. 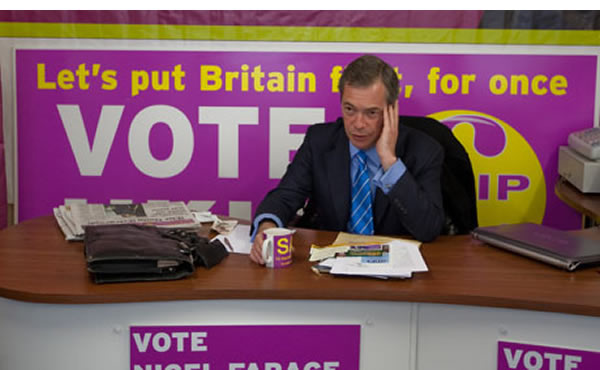 By Dr Robert Ford and Dr Matthew Goodwin; Ford is a research fellow in politics at the Institute for Social Change, University of Manchester – his research can be found here – and Goodwin is a lecturer at the University of Nottingham, whose forthcoming book, ‘The New British Fascism: Rise of the BNP’, is published on Thursday, May 5th

UKIP, a party once dismissed as being filled with “cranks and gadflies”, poses a real threat to the main parties at the forthcoming elections.

It was perhaps an acknowledgement of this challenge from a resurgent UKIP which encouraged David Cameron to make a controversial speech on immigration this week, in which he reached out to disgruntled Conservatives who might be thinking of flirting with Nigel Farage.

Though grassroots Tories have long voiced concern over immigration, they have seldom been tempted by a credible alternative. But after polling almost 1 million votes in the general election, recruiting the help of former Tory donors and finishing second in the Barnsley by-election, there is no question UKIP is on a roll. Labour progressives might find it all too easy to dismiss these events as a fortuitous bout of internecine warfare on the right. But as our recent study shows, supporters of UKIP are more than just grumpy old Tories. And there are good reasons why Labour should also be concerned by their rise.

We have examined citizens who voted UKIP at the 2009 European elections. The election of two BNP candidates stole much of the limelight that night, but UKIP far outperformed them: they beat Labour for second place, won more than 16% of the vote and elected more than a dozen MEPs. It was the strongest performance by UKIP at any election.

Drawing on a poll undertaken by YouGov, our study sheds light on the profile and attitudes of some 4,500 UKIP supporters. Respondents were asked who they planned to vote for in the next Westminster elections as well as the European Parliament (EP) elections; this meant we could distinguish voters who leant UKIP support for EP elections from those who expressed a commitment to UKIP in domestic elections as well.

The “core loyalists”, on the other hand, stick with UKIP at all elections and are a very different electorate. They are more working class, more economically insecure, and more likely to say they come from Labour-voting families. In all these respects, as our chart below shows, they are more similar to the BNP’s support base than the Conservatives’. 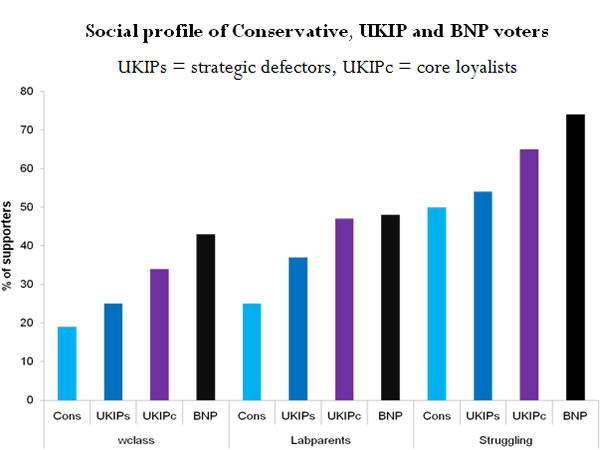 A similar pattern emerges when we look at their attitudes.

Core loyalists are intensely Eurosceptic, as we might expect, but they are also much more deeply disaffected with mainstream politics than the strategic defectors. Core loyalists regard all the main parties as the same and politicians as deeply corrupt. Anxiety over immigration also emerges as a more powerful motive for this group, although they are distinct from BNP voters on the issue of racism.

While we found many BNP supporters quite willing to endorse statements such as “black people are intellectually inferior”, UKIP core loyalists were much more reluctant – though they expressed higher levels of agreement with such statements than either mainstream Conservatives or strategic UKIP supporters. 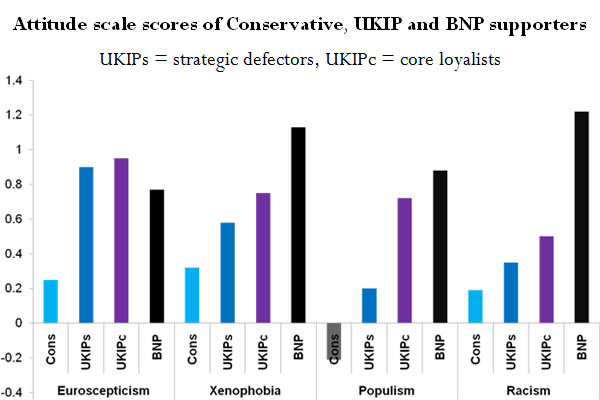 UKIP in domestic elections, then, are the BNP minus the racism. UKIP has appropriated the BNP’s most potent campaign themes – opposition to immigration, demands for Muslim integration, attacks on the political class – but is free of fascist baggage. This is important: upwards of 80% of voters continue to reject the notion that Griffin’s BNP is a credible alternative.

Unlike Griffin’s appearance on Question Time, no one is likely to accuse Nigel Farage of Holocaust denial or Nazi sympathies; but then, nor is Farage likely to defend the Ku Klux Klan. He is regarded – and treated – as a legitimate part of the political class. This empowers UKIP with the potential to win over the large pool of voters who remain disaffected from the mainstream, and are fearful about immigration – but disgusted by the extremism of the BNP.

So why should Labour worry? Our study finds UKIP’s domestic support is drawn from the same pool of angry white working class voters as the BNP, but in 2009 UKIP was already three times as popular. Since then, the political environment has changed dramatically, and largely to UKIP’s benefit. Rising unemployment and economic stagnation, combined with the coalition’s cuts to public services, will enlarge the pool of angry, economically struggling voters.

Controversies over immigration will also continue. Most migration remains outside of the government’s control and settlement rates are unlikely to hit David Cameron’s target. Voters will notice if the ‘cap’ fails, are likely to interpret the growth of already-settled minority communities as new waves of immigration and, in short, will not be happy.

There are wider consequences, as our colleague Dr Lauren McLaren has shown. When voters hold negative ratings of immigration, they are also less likely to trust their political institutions.

The entrance of the Liberal Democrats into the coalition has also changed the dynamic, for it leaves UKIP alone as the only “protest party” with national presence for voters disgruntled with the coalition but also unimpressed with Labour. This gives UKIP an unprecedented opportunity to build a national presence. They have a large electorate of socially conservative, Eurosceptic, anti-elitist, anti-immigration voters virtually to themselves.

The BNP’s bankruptcy and infighting leaves no competition on the far right; the compromises of coalition limit the Conservatives’ ability to compete from the centre-right; and Labour’s divisions over immigration leave the centre left silent on an issue which is of major concern to voters.

How concerned should those on the centre left be? In a recent study, we estimated that perhaps 20% of the British electorate are available to be mobilised by a radical right party. The Searchlight Trust recently came to the same conclusion, noting how Britain lacks a successful radical right party:

“…not because British people are more moderate but simply because these views have not found a political articulation.”

A sustained breakthrough for UKIP would have serious consequences. The emergence of powerful radical right movements in countries like Denmark, the Netherlands and France has pushed the debate over immigration, identity and integration firmly to the right. France has implemented a burqa ban; the Dutch government relies for its majority on a party whose leader compares the Koran to Mein Kampf; and the entrance of the Danish People’s Party into a governing coalition led to the passage of draconian immigration laws.

UKIP still has weaknesses, particularly in the strength of its activist base and local organisation, but it is operating in the most favourable environment it has ever seen and if it breaks through there is widespread support for its brand of politics. Those on the centre left who are cheered by the collapse of the BNP could soon find themselves facing a much more potent and respected radical right competitor. They need to develop an effective response. And now.

83 Responses to “Progressive politics and the purple peril: The rise of UKIP”