Nerys Evans, Plaid Cymru candidate in Carmarthen West and South Pembrokeshire and the party’s Director of Policy, sets out Plaid’s vision for Wales as the launch their 2011 Assembly elections manifesto. 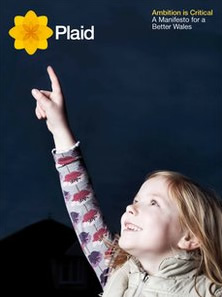 With just over three weeks to go until the Welsh election, Plaid Cymru’s activists are out and about, campaigning, leafleting, canvassing, and encouraging people across Wales to turn out and vote Plaid twice on May 5th 2011.

While we are, of course, fighting this election in the dark shadow of Conservative and Liberal Democrat cuts to the Welsh budget, Plaid Cymru is choosing instead to look ahead.

We are taking a positive, ambitious approach to the future of our country – for too long, other politicians have been willing to settle for the status quo. They’ve let Wales lag behind. It’s time for things to change.

The Tories in Wales are pursuing an ideological and punitive cuts agenda. The Liberal Democrats have given up. Labour are struggling to find the energy to come up with new ideas – they are tired, and lack hope and ambition for our country.

Yet Plaid Cymru wants to build a nation that thrives and prospers as a result of its own strong and sustainable economy with excellent schools and first-class healthcare. A Wales that can provide a better standard of living for all through hard work, a commitment to equality, fair play and a sense of ambition for family, for community and for the nation.

After all, our nation has always paid its way. The people of Wales have given their young people to industry, their lives to the army, their talents to the British economy. We believe that Wales should not be denied her potential and that it is in the interests of all who live in Wales to live in a country that has the self-respect to run its own affairs and control its resources.

We’ve drawn up a detailed manifesto, available on our website, for anyone to download. It’s a realistic and ambitious programme for the next Welsh government. Our experienced team is ready to transform our country with a plan to protect people and frontline services in these difficult times, to create good jobs in our communities, to create excellent schools and hospitals for the next decade.

For example, Plaid is going to facilitate investment of up to £500 million in building new schools, hospitals and roads, without using PFI. We’re going to ensure that we halve illiteracy rates within the next five years, and that we virtually eradicate the problem by 2020.

We’ll renegotiate GP contracts, and invest in a world-class system of cancer care and treatment. We’re going to roll out high-speed broadband, and put in place a modern wireless and mobile signal network across Wales.

In short, Plaid has the vision, the ideas, and the energy to make the next decade one of change. A decade of delivery. We’re not scared of hard work. We know the next few years will be tough – but Plaid knows that we’re ready to lead.

We’re ready to change Wales for the better.