Shamik Das reports on today's Yes to AV and No to AV press conferences, plus the latest opinion poll on the Alternative Vote referendum - showing a 16-point 'No' lead. 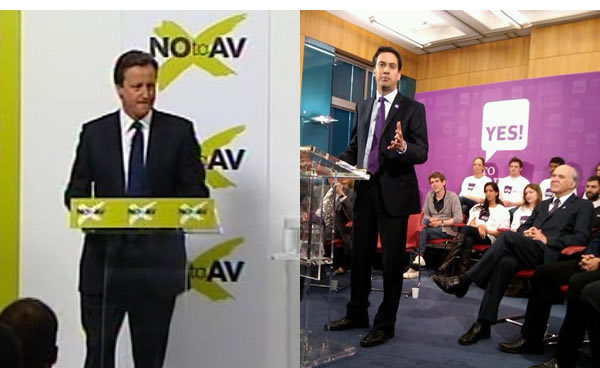 Another day, another surfeit of myths from the No To AV campaign, with lashings of fear, hysteria and anger thrown in to boot. Just an ordinary day in the referendum campaign then, with today’s scaremongering served up by the slightly-less-unpalatable-than-Warsi-and-Osborne double act of David Cameron and John Reid.

On the other side, in contrast to the Tory leader and the former Labour home secretary clinging to their lecterns for dear life, a genuine cross-party, cross-society gathering: politicians Ed Miliband, Vince Cable, Alan Johnson and Darren Johnson; trade unionist Billy Hayes; fashion designer Amisha Ghadiali; and Eddie Izzard.

However, for all the facts, fear appears to be swaying the public mood against reform, with a poll for tomorrow’s Guardian giving the No campaign a 16-point lead – 14 points higher than the No lead in the same ICM series two months ago. The poll asks the same question that will appear on the ballot paper:

“At present, the UK uses the first past the post system to elect MPs to the House of Commons. Should the alternative vote system be used instead?”

“Among people who say they are likely to vote and have made up their minds, the No lead is now 16 points, with 42% saying yes and 58% no. Three-quarters of Conservatives are planning to vote will vote against, as will a small majority of Labour supporters. Only Lib Dem voters are firmly in favour, with more than two-thirds saying they will vote for the change.

“The Yes camp could still turn things around by winning over the 23% who say they do not know how they will vote, but this includes many people who say they may not turn out at all.

This morning, at the their press conference, we again had the extremism point and the comparisons with Australia from the no camp – rebutted here and here – with the myth of the day that AV is a system of “one person, many votes”, Cameron saying:

“…I believe in the principle of one person, one vote, and AV would mean the votes of some people get counted more than others.”

“It would not only be wrong, but it would be an outrage to try and secure a change to the electoral system for tactical party advantage by usurping the right of our citizens to an equal vote… The first votes to be counted twice are of the least popular candidate.”

A point he repeated on Boulton & Co. on Sky News at lunchtime, alongside the claim Hitler gained power because of PR.

As the graph below from @stackee shows, each person only gets one vote per round:

A point illustrated by Will Straw on Sky News today, when he said:

“If you go to the pub and order a pint of John Smith’s but they are out of Smith’s and you choose a pint of Guinness instead, you’ve still only had one pint.”

With just 17 days to go, the Yes campaign have it all to do to turn round the polls, and, crucially, inspire the don’t knows and won’t votes to choose hope and not miss this once in a generation opportunity to change our politics for the better.