Dominic Browne with a round-up of news and analysis from the elections in Nigeria and the subsequent violence, following Goodluck Jonathan's victory. 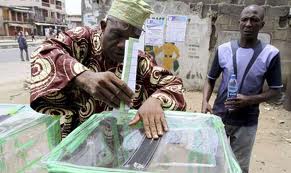 The riots that erupted in Nigeria yesterday, following what was seen as the fairest election the country has conducted in decades, have caused thousands to flee their homes. There were reports of gunfire, and burnt houses and churches in the north of the country on Monday following the presidential poll on Saturday.

The news that Goodluck Jonathan (PDP candidate) from the Christian south and the incumbent president, who as vice president inherited the post a year ago when Umaru Yar’Adua died, looked to have an overwhelming lead, sparked violent protests by his rival’s supporters. Mr Jonathan has now been declared the winner.

The Guardian had reports of youths setting fire to homes bearing Mr Jonathan banners. They also have quotes from people at the centre of the violence:

“Shehu Sani, a civil rights leader, said: “I’m holed up in my room. There’s gunshots everywhere. They are firing and killing people on the street.”

Jonathan’s main rival was Muhammadu Buhari (CPC candidate), a former military ruler from the Muslim north. General Buhari has criticised the violence. He told the BBC:

“In the last 24 hours there has been a spate of violence in the country this has included the burning of churches and is sad, unfortunate and totally unwarranted development.

“I must emphasise that what is happening is not ethnic, religious or regional.”

This statement echoes the words of a Nigerian police spokesman who said to the BBC World Service:

“Let me be clear the disturbance has nothing to with religion, nothing to do with ethnicity, it is purely political.”

A curfew had to be imposed in several areas to stave off more violence. A correspondent for the BBC World Service in Nigeria said yesterday:

“Things seemed to have calmed down now, after the police and in places the military have gone onto the streets.”

However, commentators on the service expressed concern over possible reprisals in the Christian south, and the BBC this morning have reported that in Kano, the largest city in the north, police and soldiers are patrolling the streets and manning checkpoints.

The BBC have reported that the electoral commission said Mr Jonathan received about 57 per cent of the vote with 22.5 million votes to Gen. Buhari’s 12.2 million votes.

Nigeria has a record of corruption and vote rigging and has struggled to achieve full democratic status since shaking off military rule in 1999.

“Compared with earlier years, relatively few people, about 39, were killed in pre-election violence, according to the Election Situation Room, a Nigerian civil society group. There have been several bomb blasts as well, notably in the north, home to a militant Islamic sect. But the systematic manipulation that plagued previous elections appeared to be absent, experts said…

“Already, before Saturday’s vote, the parliamentary elections last week were “peaceful and credible in most parts of the country,” said Peter Lewis, a Nigeria expert at Johns Hopkins University. “This is the first poll they’ve had under a civilian administration where they’ve had a reasonable degree of organization,” Mr. Lewis said.

“Nigerian analysts concurred. “At this stage we’re satisfied so far,” said Clement Nwankwo, the executive director of the Policy and Legal Advocacy Center in Abuja. “For a lot of Nigerians it was really a relief to see the elections go as peacefully as they did last Saturday.”

Buhari’s camp had said however that the result looks suspicious with exceptionally high turn-out in some of Jonathan’s strongholds, some states even showing 99 per cent support for him.

Nigeria has an unwritten power sharing agreement which sees a Muslim northerner usually follow a Christian southerner in running for president. The Guardian have an editorial this morning, which explains the principle, called “zoning”, in more detail and how Mr Jonathan has swept it away.

As Muhammed Jameel Yushau explained on the BBC:

“Elections in Nigeria are not necessarily about issues but about ethnicity, religion and regionalism. So historically they have been won as a result of either a formal alliance by political parties or – more recently – an informal agreement within the governing PDP party to alternate the presidency between north and south.

“For this reason, the winning candidate – irrespective of region, religion or ethnicity – normally commanded a wide national spread. In 1999, Olusegun Obasanjo, a Christian from the south, won the majority of the votes in northern Nigeria. However, the rotation was broken when Mr Jonathan succeeded to the presidency last year after the death of Umaru Yar’Adua, a northerner.

“This election, described by international observers as the most successful for decades, seems to be compounding the country’s regional and ethnic divisions.”