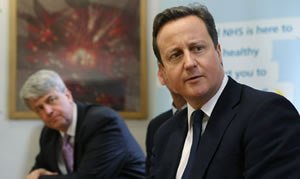 The number of patients waiting in Accident and Emergency for treatment for over four hours has increased by 63 per cent compared with the previous year, following Andrew Lansley’s scrapping of the waiting time targets imposed by the previous government.

“An extra 73,000 patients were left to wait for over four hours in the last three months of 2010 compared with the previous year, according to data obtained by BBC Newsnight.

“In total, 184,000 patients waited more than four hours in A&E departments between September and December 2010. If the increased numbers remained the same over a full year, it would mean an extra 300,000 patients facing long waits compared with a year before.

“The number of patients waiting over four hours increased in 129 of the 149 trusts where data was available.”

“The Coalition is walking away from any role in or accountability for maintaining core standards.”

Now we see there is evidence that this ideology has resulted in declining standards in hospital care.

“It (the NHS) has to change because for many people, the service isn’t good enough. Mostly, that’s not the fault of those who work in the NHS. The fault lies with big government. With their endless targets and reorganisations, Labour have tried to run the NHS like a machine.

“This lever-pulling from above – it has got to stop. With Andrew Lansley’s reform plans, we’re going to give the NHS back to people. We’ll say to the doctors: those targets you hate, they’re gone.”

So far every one of Mr Cameron’s above points has been shown to be wrong or flawed. The British Social Attitudes (BSA) survey suggests that the NHS has never been so popular since the survey started in 1983, government targets, as seen above, have had positive effects in key areas of care, and Lansley’s reforms have been rejected by Doctors, by Lib Dem Lib Dem party members, by Norman Tebbit and by at least some of the people.

17 Responses to “No accident that emergency waiting times are longer”