David Cameron has been criticised for packing the Lords with new peers. Despite his calls for a "wholly elected" second chamber, Nick Clegg endorses the practice. 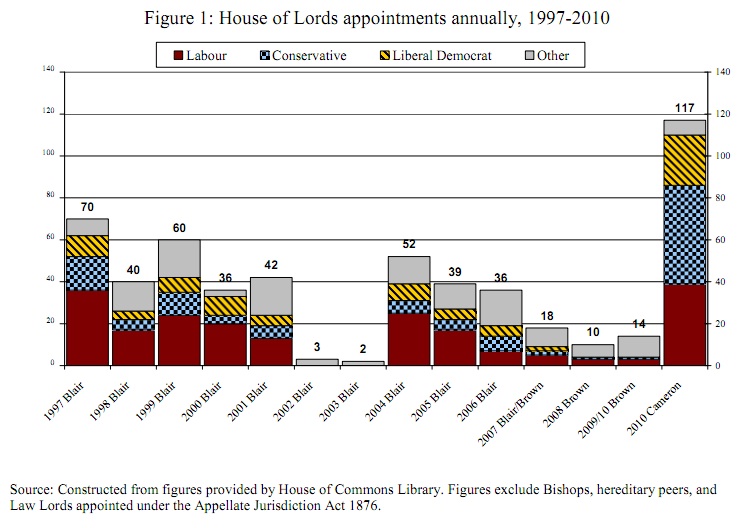 Lords reform is back in the news. The Guardian’s Allegra Stratton tells us that a no vote to AV could trigger a big push for change to the second chamber while a prominent group of cross-party parliamentarians have told David Cameron to stop packing the Lords with new peers.

The UCL Constitution Unit’s report, ‘House full: Time to get a grip on Lords appointments‘, which is supported by 15 peers and MPs, makes eye watering reading. As the chart below shows, in his short tenure as Prime Minister, David Cameron has already created 117 new Lords. Indeed, even taking into account Gordon Brown’s 32 resignation honours and Labour’s 13 resolution peers, David Cameron is creating peers at a rate ten six times faster than his predecessor, Gordon Brown, and three times twice as faster than as Tony Blair.

Speaking at the Institute for Public Policy Research yesterday on “the new politics“, Nick Clegg reiterated his support for a “wholly elected second chamber”. I asked him whether it was possible to hold that view alongside support for the rapid increase in the number of new Lords appointments. As Sunder Katwala mentioned in his blog on the event, the Deputy Prime Minister failed to answer my question but his office were good enough to get back to me.

A spokesman for the DPM told me that Clegg did not support UCL’s call for “An immediate moratorium on Lords appointments, to be lifted only once the number of members eligible to attend the chamber has dropped below 750”. The spokesman went on to say:

“The Government will be bringing forward a Draft Bill next month proposing a wholly or mainly elected House of Lords. This will be elected using proportional representation in order to ensure it is reflective of the way people voted.

However, introducing this will take time and in the meantime Lords appointments will be made with exactly the same aim – creating a second chamber that is reflective of the share of the vote secured by the political parties in the last general election. The current system of appointing peers will therefore remain until the Government’s reforms are in place.”

Supporting a wholly elected House of Lords and making the most rapid set of appointments in a generation strike me as inconsistent positions. Could Clegg’s pragmatic approach have anything to do with the fact that the Lib Dem cohort in the Lords has increased by 24 to 93 since the election – a whopping increase of 35%? New politics, indeed.