The government's cuts to English for Second Language classes make a mockery of the David Cameron's call for immigrants to integrate more in his immigration speech. 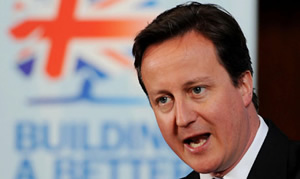 In a keynote speech on immigration today, a couple of weeks before elections, David Cameron conceded that immigration is a hugely emotive issue that must be handled with sensitivity.

Some might question how sensitive it is to then talk about ‘good’ and ‘mass’ immigration and warn immigrants that they must learn English, at a time when his government is slashing both funding and opportunities for people who desperately want to learn the language.

English for Speakers of Other Languages (ESOL) has seen a cut of 32 per cent in funding in the last two years.

Furthermore, according to the Action for ESOL campaign, changes to eligibility for free ESOL classes will result in around 100,000 people, three-quarters of whom are women, being hit with fees of up to £1,200 – charges they simply cannot afford.

In a survey by the Association of Colleges, 75 per cent of colleges said they would have to reduce the amount of ESOL provision they provide if there were no concessions around the changes to who is entitled to free ESOL classes, because of their concern at students’ ability to pay the fees.

The cuts to further education funding are creating the most serious crisis for the future of ESOL the country has seen. If the government truly wants people to integrate and be part of its ‘big society’ then language is the key. Among the people learning ESOL that we speak to are those who have fled war-torn countries; they want to work and want to pay their way, but they need to be able to speak the language to do that.

The prime minister’s attack comes just days after his fact-free attack on Oxford University’s record of recruiting black students and seems symptomatic of a government keen to chase a headline but not keen to explore or understand the real problems behind an issue.

Learning English on arrival in this country is the best way to get people out of poverty and into their local communities. It is the responsibility of, and in the interests of, numerous government departments to ensure people are not excluded from being able to learn English and that must be reflected in who picks up the tab.

We, literally, cannot afford the most needy and vulnerable in society to become further marginalised through an inability to learn and speak the language of this country. Something the prime minister should consider before making ill-advised attacks on immigrants.