Dominic Browne reports on the launch of an interactive map that shows you the extent of the coalition police cuts in your area. 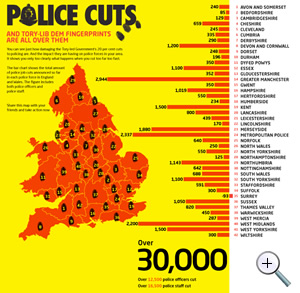 The fallout from the government’s cuts to policing has been mapped out by the Labour party. The map shows how the 30,000 staff cuts, including 12,500 police officers, will be distributed throughout England and Wales. The worst hit areas are Greater Manchester, which will lose 2,944 jobs, and the Met, which will lose 2,337 jobs.

Despite the cuts David Cameron and the Conservatives have always insisted frontline staff would be protected. During the election he said:

“Any Cabinet minister, if we win the election, who comes to me and says ‘here are my plans and they involve front line reductions’ will be sent back to their department to go away and think again.”

However Left Foot Forward has highlighted just how frontline the cuts actually are. Using A19 orders the coalition government have forced experienced and uniquely skilled officers into retirement.

Many of these officers would fit with the recently created working definition of “frontline” (pdf) as provided by Her Majesty’s Inspector of Constabulary, HMIC, after a freedom of information request laid bare the fact that the Home Office had no such definition in terms of policing to begin with.

Cameron was publicly chastised for his disingenuous law-and-order rhetoric following the leadership debates. The prime minister was subsequently challenged by the Met on his typical “form-fillers” jibes concerning so-called non “frontline staff”.

In fact the conservatives are using “boriseconomics” to justify cuts that go beyond what HMIC think could be done without compromising the service. The Police Federation have attacked the coalition cuts with a high profile campaign under the heading “Cuts are Criminal”.

“The police federation are not a road block to reform. I think we are being pulled in very different directions. We have had lots of reports some contradictory.

“The cuts are right across every area of policing…We have officers who sit behind a desk who have very responsible demanding jobs… We need them to be fully operational.”

He has called for a Royal Commission to analyse and clarify the strategic future of the police force in the UK. He is supported by John Hemming Liberal Democrat member of parliament for Birmingham Yardly, who has tabled an early day motion for such a commission.

Mr Gilbert added that he thought the alternative Labour policy, accepting the HMIC recommendation and limiting police cuts to 12% rather thn 20%, “would have been sensible”.

“There is some science behind it, in that it’s a HMIC recommendation.”

Which is more than can be said for Mr Cameron’s unscientific division between so-called frontline and back office staff and the pretence that communities won’t feel the effect of the cuts on the streets.