Continuing our series on historic women as part of Women's History Month, Barbara Castle is profiled by Jack Straw, formerly her Special Adviser. 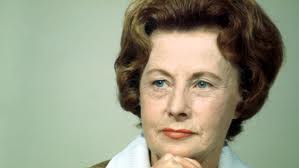 One of the first letters of congratulation which Margaret Thatcher received on her election as Conservative party leader in February 1975 was from Barbara Castle. I happened to be with her when she wrote it as soon as the news came in: “I can’t help feeling a thrill” Barbara later recorded in her diary, “she is so clearly the best man among them”.

So was Barbara. The two were remarkably similar, not least in their uncompromising determination to beat the men at their own game. Both were preoccupied about their personal appearance.

When I was her Special Adviser (1974-76) I had many “meetings” with her in her hairdressers in Islington, shouting under the plastic helmet of the dryer. Both used their superficial femininity to get their way. Barbara could turn tears on – and off – like the best of actresses.

Both were convinced that they knew the answers – their undoing. For Thatcher this led to the loss of the Premiership after eleven-and-a-half years in Downing Street. For Castle, the penalty was much worse.

Her failure (and Harold Wilson’s) to have achieved any kind of consensus within Cabinet, still less inside the Labour party as a whole, for the industrial relations’ reforms in the famous 1969 White Paper “In Place of Strife”, led not just to the humiliating collapse of this policy, but ended the previously high prospect that she might become the first woman leader of the Labour party – and first woman prime minister.

But whilst Thatcher evinced little interest in women’s issues, these were central to Castle’s political agenda. This was not from any sense that she needed some special help to advance her own career – in many ways, like Margaret Thatcher, she had thrived in a man’s world, and, I always suspected, was not unhappy that she was one of the few women around at the top of politics.

For her, a commitment to achieving a greater measure of equality for women came from her overall political values, and from her fury that so many others, whether because of class, colour, or gender, had had their dreams crushed by the social and economic mores of society at the time.

“Spending a penny” is a euphemism for going to the lavatory which has almost entirely dropped out of use. But it was no metaphor. For men, public urinals were free. For women it cost an (old) penny. No money; no relief. Barbara headed a campaign to end this overt discrimination. She won. In our Blackburn office we have a great photograph of her and others demonstrating outside a public lavatory.

Her much bigger achievement was in respect of equal pay. Her intervention in the Ford machinists’ pay dispute over equal pay has now been immortalised in the film “Made in Dagenham”. She resolved the dispute by personal intervention. She then used it as a springboard for much wider action.

Back in the early fifties Barbara had co-sponsored a bill on equal pay. The Labour party was theoretically committed to this goal, but always found reasons for delay. Emboldened by the lessons on the Ford dispute – and in need of some better publicity after the debacle of In Place of Strife, Barbara gripped the issue. She pushed through the ground-breaking Equal Pay Act 1970, and was able to see its implementation in 1975 as the  Ministerial Chair of the Women’s National Commission, another legacy of the Ford dispute.

There’s quite some way to go before there is real equality for women in the work place. But there would be further still to go had it not been for Barbara Castle’s determination to make progress on this key issue of fairness in our society.