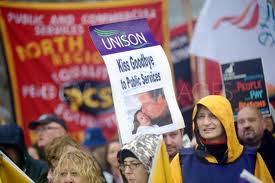 Left Foot Forward followed the march on Saturday, listened to the speeches and spoke to… whoever would speak to us – about why they were marching, what they thought of the opposition to the government and how the cuts affected them.

Told Left Foot Forward that one of the reasons he came out for the march was hearing Mervyn King talk about how he sympathised with public anger at the bankers over the economic situation.

Morris also said he was a fan of MC NxtGen’s Andrew Lansley rap:

“He’s [MC NxtGen] got something good to say and he says it very well.”

Morris recommended the music video of the rap to Adam Buxton who showed it at a South Bank film event where it apparently got the largest applause of the night.

“The anti-cuts movement has built a wide, broad coalition which makes it all the more surprising that party leaders who oppose the cuts have not been invited to speak at the rally. I am really disappointed that the leaders of Plaid Cymru and the Greens have been denied a platform at Hyde Park.

“The organisers have invited Ed Miliband to speak but he’s in favour of cuts. The big failing so far of the alternative to cuts movement is that it hasn’t set out a credible alternative way to plug the deficit…

“I am really surprised that the Left and trade unions are not speaking more strongly for the Robin Hood Tax. A tax of 0.05% on all financial and commodities transactions would raise a staggering 100-150 billion pounds a year this is enough to plug the deficit in two years without any need for cuts…unless we start promoting this alternative I don’t think we will win.

“The public really wants to know; what is the alternative to the Cameron Clegg cuts package. Labour currently has not got any convincing alternative and David Cameron exploits this.”

“The turnout seems as if it’s absolutely fantastic, way beyond what we expected… It’s a really powerful message. This is middle Britain on the march. These pathetic attempts to smear all opposition as if they are extremists will not work. Cuts are doing extreme damage and we have to see a change. I think the Labour message is the right one.

“We have to keep up the pressure on the Conservative government, MPs in their constituencies. We are doing local campaigning. The local elections are coming up in May. The coalition parties must be worried about what they are going to show in them. We have to keep a strong pressure on sectoral issues; the NHS is really worrying me. Beyond the cuts this idea of any willing provider is very worrying.

“I think the [Lansley] bill if profoundly wrong. I think that was the message the Lib Dem’s were given at their conference. I think a few changes are not going to satisfy Clegg’s own party let alone anyone else.”

“I work as a gardener and they are cutting our pay. I couldn’t afford my rent and living and I had to leave my job of four years as a Leicester Square gardener.

“It’s very bad and I am looking for another job but the job centre is very full of people looking for a job.”

“We do support the labour movement as a whole, not particularly the Labour party but the labour movement. I think the Conservative and Liberal Democrat government is not being fair to the working classes and students and the young people, and also particularly the old age pensioners; many of whom were young people during WW2 and consequently hoped that their future and the future of all people would be a lot better than it was in the 1940-50s, now it’s being attacked by the cuts.”

“My girlfriend currently works at a public youth centre on the Isle of Dogs and she had her funding cut from 12 thousand pounds to three thousand pounds. That means everything she has been working on for the last three years is going to be destroyed… This march has opened my eyes…

“I have been on marches for different things in the past and I had a feeling this was going to be big but I think this has the kind of presence that the government cannot ignore.”

“I work in a special school and our funding has been cut. Many of our pupils come to school by a funded transport bus and that has been cut. If they live inside a two mile radius they have to come in on public transport so if you live in that area and you have other children, who go to other schools how are you going to take them to school as well.”

Left Foot Forward did not witness first-hand any of the reprehensible violence and criminal behaviour that took place on Saturday. We have contacted Westminster Council and can report that the estimated cost of the damage done to public spaces/areas alone was £50,000. Money that could have been much better spent. The public clean up operation is complete however and Westminster Council confirmed that no residents have filed complaints.

Anthony Painter has written on the type of protests that diverted attention from the issues on the day:

“Even if we accept that there was no violent intent from any members of UK Uncut they selfishly, self-servingly, and naively dragged attention away from the main message of the march.

“I hope the TUC continues marching. I hope it gives voice to the voiceless in every village, town, and city in the land. UK Uncut owes a lot of apologies…. We can overcome. But only if we are wise. A small minority were not only unwise on Saturday. They were downright dumb.”

13 Responses to “Views from the March for the Alternative”