The Conservative-led government's 'Open public services' white paper is expected any day; it is a rush to outsource our public services on a scale that threatens the very notion of what is ‘public’, writes Unite's John Earls. 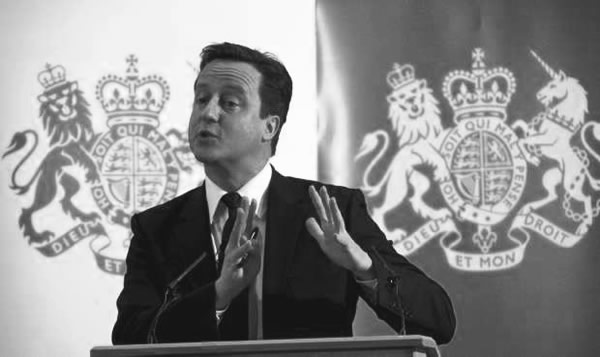 John Earls is Research Section Head at Unite the Union

The Conservative-led government’s ‘Open public services‘ white paper is expected any day. But the direction and speed of travel is clear, as confirmed by David Cameron in The Daily Telegraph a few weeks ago. It’s a rush to outsource our public services on a scale that threatens the very notion of what is ‘public’.

Unite, the UK’s largest trade union, has today published a report by economist Howard Reed which challenges many of the assumptions cited by those pushing the outsourcing agenda. Among his conclusions are:

• The government’s plans to outsource public services are being rushed through at breakneck speed without proper consultation, planning or evaluation. For example, the white paper call for evidence allowed less than six weeks for responses, including the Christmas period, breaching government guidelines (pdf) on consultation which specify a minimum of 12 weeks;

• Expanding outsourcing in the current climate of severe cuts to public spending means declines in service quality are almost inevitable;

• There are clear dangers that increased outsourcing will result in reduced transparency and democratic accountability of service provision. Particular concerns include the scope for outsourced public service providers to be outside provisions in respect of the Freedom of Information Act and responsibilities to promote equality;

• The voluntary, community and not-for-profit (VCN) sector has a clear role to play in supporting high-quality public services, but a mass shift of service provision to the not-for-profit sector runs the risk of being the long and painful route to privatisation, if VCN organisations fall victim to acquisition by large-scale for-profit providers;

• It is in the commercial interests of private sector outsourcing providers to lobby politicians to promote greater use of their preferred model of public service delivery, and lobbyists have influenced policy development in areas including education and auditing.

Clearly, the government’s ‘reforms’ have huge consequences for public service users – not least the most vulnerable – and trade unions are an important part of the broad coalition that is resisting the attacks on public services. But Unite is also focusing on what this means for workers delivering public services (in the public, private and not for profit sectors).

In new evidence using data from the Labour Force Survey our report compares the conditions of employment of public sector, private sector and voluntary sector employees in similar jobs such as childcare, healthcare, social work, cleaning and administrative jobs.

Short job tenure and high turnover can have a detrimental impact on service delivery as they disrupt the relationships between service users and providers, while working long hours can put the safety of service providers and users at risk. As the graphs below show, short job tenure (one year or less) and working long hours (more than 48 hours per week) are more common in the private sector than the public sector, with the voluntary sector somewhere in between. 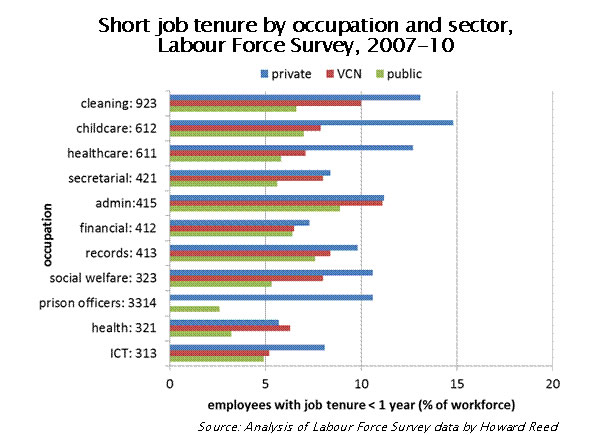 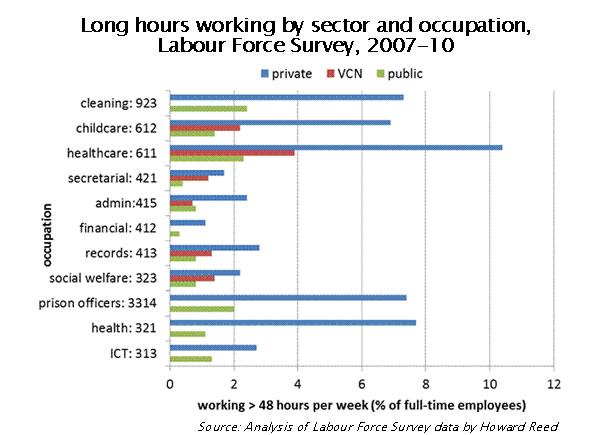 Unite is not against change – but reform needs to be based on sound, evidence-supported arguments – not on an ideological drive to ‘shrink the state’. And sustainable change requires the involvement of staff. Public service workers and their unions provide the knowledge, insight and experience essential to ensuring reform is effective and deliverable.

‘Shrinking the state’ might sound attractive when it is dressed up as dealing with so-called faceless bureaucrats. But ‘the state’ actually means our health and care services, education, youth services, libraries, and civic spaces. In short, the public services we value.

That is why the government’s plans are so dangerous and why they must be resisted.