Social Fund cuts announced yesterday by Steve Webb will hit the poor and needy and plans for handing the Fund over to local authorities will make things even worse. 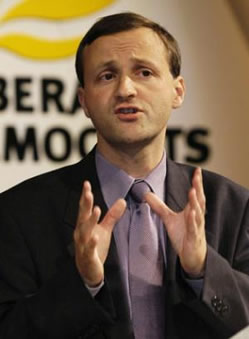 Social Fund cuts announced yesterday by Steve Webb will hit the poor and needy and plans for handing the Fund over to local authorities will make things even worse. The Social Fund is a vital part of the welfare system: it helps people cope with a budgeting crisis, with absolute destitution and with large unavoidable bills.

Webb claimed that part of the Social Fund – Crisis Loans – has grown so fast it is “unsustainable”. This is, it seems, entirely down to the fact the last government changed how you apply for a Crisis Loan.

Until 2006, the normal procedure was to go to your local Jobcentre Plus office and apply there; since then, most applications have been by phone. Since then the number of claims has grown and now he has to “rebalance supply with affordable resources”.

If “remote applications” caused the crisis, the answer, you might think, would be to return to going along to your local office. This would have the added advantage of putting the process in the hands of people with the local knowledge that will help them to make an informed judgement about your claim.

Instead, from April 4th:

• They will stop paying Crisis Loans for things like cookers and beds though there will be “residual support for people following a disaster such as flooding”;

• When Crisis Loans are paid for living expenses they are currently paid at 75 per cent of the means-tested benefit rate – this will be cut to 60 per cent;

• Crisis Loans for living expenses will be capped at a maximum of 3 a year.

Although there will be some support for high-visibility crises, when there are plenty of journalists around, there will be nothing for day-to-day disasters. Families whose flats have burned down will have to look to other charities to furnish their new homes. Children with parents escaping domestic violence will be left with the clothes they are wearing.

This decision sets the scene for the Cathy Come Home of the 2010s.

Some of the increase in the numbers claiming Crisis Loans may be due to the new way claims are made; you may think that this suggests that, if that is so, the new arrangements did us a service in revealing previously unmet need.

But two other factors are also important:

• Could the global financial crisis, recession and large rise in unemployment have played a part? (This is a question to which the answer is “Duh”.);

• Probably more importantly, the pressures on Jobcentre Plus will have contributed too. The commonest reason for getting a living costs loan is being destitute and not having received your benefit yet.

PCS have been complaining for weeks about the growing backlog of unprocessed claims as the system struggles to cope with demand that is rising faster than resources. If you have a complicated claim, it is quite possible to use up the proposed limit of three loans one after another.

Eventually, there is going to be an expanded system of advance payment of benefits that will help with this problem (see below) but this won’t come in till 2013 and a lot of families will suffer the consequences over the coming two years.

It is worth remembering that Crisis Loans are loans – net spending is about half the £233 million mentioned by Webb in his announcement. The surprising thing about all this is that it comes just after the government began a consultation on “localisation” of the discretionary (*) Social Fund.

Under these plans, from 2013 Community Care Grants and Crisis Loans for living expenses are to be replaced. This will be done partly by expanding the arrangements for advance payments of benefits, but mainly by “new locally based provision”. There will be no statutory duty on local authorities to deliver the service and there will be no ring fencing of the money provided to help Councils take over this provision.

The government want to cut gross spending on the discretionary Social Fund from £872 million in 2010/11 to £138m in 2011/12, but this seems like a particularly unfair saving. Social Fund loans are by definition being made to people in dire circumstances, and even before their crisis, they were the poorest people in the country.

The main route to eligibility is to be on a means-tested benefit – ten years ago – an independent scientific investigation found that the minimum income needed for a healthy lifestyle was twice the amount such benefits pay now.

Until a year ago, Steve Webb was one of the most effective Opposition politicians. He pointed out that the real scandal about Social Fund loans is the number of people who get turned down. What would he have made of this decision?

(*) The “regulated Social Fund”, including Funeral Expenses Payments, Sure Start Maternity Grants and Cold Weather Payments appears to be safe.