There was widespread condemnation today of the assassination of Shahbaz Bhatti, the Pakistan Minister for Minorities, gunned down in broad daylight in the capital Islamabad. 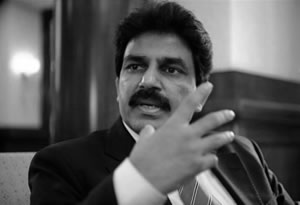 There was widespread condemnation today of the assassination of Shahbaz Bhatti, the Pakistan Minister for Minorities, gunned down in broad daylight in the capital Islamabad. He was the cabinet’s only Christian minister, and had received death threats after calling for the reform of Pakistan’s blasphemy laws. This is the second such murder in the space of two months; in January, the Governor of Punjab province Salman Taseer, who also urged reform of the blasphemy laws, was assassinated by his bodyguard.

“It shows what a huge problem we have in our world with intolerance… I will send not only our condolences but our clearest possible message to the government and people of Pakistan that this is simply unacceptable.”

Maajid Nawaz, director of Quilliam, the UK counter-extremism think tank, and founder of Khudi, an organisation that works to challenge extremism and promote democratic culture and mutual respect in Pakistan, added:

“This latest murder shows the threat that extremists pose to Pakistan. Civil society in Pakistan is being systematically destroyed by extremists. Pakistanis who publicly stand up for justice and tolerance are being targeted and sometimes killed.

“While the Middle East is embracing democracy, Pakistan appears to be retreating into vigilantism and anarchy. The Pakistani government needs to take responsibility for this rising extremism. It desperately needs a national counter-extremism strategy. It needs to stand up for the values of Pakistan’s founder, Muhammad Ali Jinnah.

“At present, rather than adopting a unified policy, only a few individuals within the government are standing up for Pakistan’s founding values and these are being assassinated one by one. Pakistan is the key to peace in South Asia; if Pakistan burns, the region will burn with it.”

Many questions are now being asked about the future of minorities in Pakistan, particularly Christians, and who will stand up and be counted.

Former Guardian editor Peter Preston, writing on Comment is Free, described the assassination as “a bad day for Pakistan’s democracy”, and that “no one dares speak out against religious zealotry”:

“Shahbaz Bhatti, Islamabad’s minister for minorities, is assassinated outside his home by four assailants who leave Taliban tracts behind them. Bhatti was a Christian, speaking out for an increasingly oppressed minority and ceaselessly advocating the repeal of Pakistan’s blasphemy laws…

“Who’ll draw a line and turn the tide? No president, present or future, you can see. Not a feeble, flailing Zardari. Not his old adversary, Nawaz Sharif and his Muslim League. Not some general waiting in the wings. The difficulty is that there is no one, and no concerted body of opinion, who can join, let alone hope to win, this debate for what may come to symbolise the destiny of Pakistan.

“For tolerance, for restraint, for the ability to live side by side in a truly free world? If Cairo adds a spoonful of hope, Lahore, Karachi and Islamabad bring only the recipes of despair.”

“Today, barely three months later, both Salman Taseer and Shahbaz Bhatti are dead, both killed by Muslim extremists who believe their liberal outlook posed a threat to the standing of their Prophet. Sherry Rehman has been in hiding and her prime minister has killed any hopes of repealing the blasphemy laws under the only government ever likely to consider it…

“…the tiny Christian, Parsis, Sikh, Hindu and Ahmadi minorities will have seen that if even some of the most powerful people in the country – those with highly armed protection details like Bhatti and Taseer – can be killed so easily, what hope can they ever have of a fair hearing in any future dispute with a Muslim?…

“This wasn’t the Pakistan its founder Mohammad Ali Jinnah had in mind. Shortly after its creation, he told its Constituent Assembly:

“The tragedy of Pakistan is that Jinnah’s vision never came to pass, and the tolerance he sought has become a capital offence.”

As Ed Jacobs wrote on Left Foot Forward in January:

“…standing up for Christians who face persecution by those who misunderstand their faith as somehow a threat to their authority or policy goals is more than simply a case of standing up for a law in an international convention. It is about standing up for people’s right to openly pursue the faith that sustains and strengthens them and that gives them hope in what all too often turns out to be a hopeless world.”

5 Responses to “Shahbaz Bhatti assassination: Who will stand up to the extremists now?”