The alternative to military action to take out Gaddafi is to stand aside and watch as the tyrant perpetrates a massacre of his own people and Libya risks collapsing into a failed state. 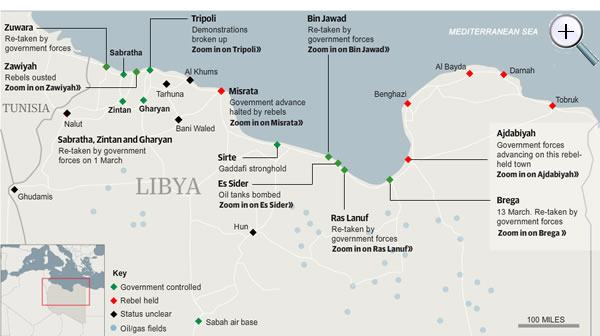 As former Army Captain Patrick Bury reported yesterday, it is now highly likely that in the absence of outside military intervention the rebels will either be defeated outright or a protracted civil war will unfold.

Even so, it is not too late for Western governments, acting in concert with key regional allies in the Arab League, Gulf Co-operation Council and African Union, to respond to protect the rebellion and safeguard their own long-term interests. At stake for both NATO and the region is credibility and stability.

Western governments are guilty in the meantime of a failure to respond responsibly to the Libyan crisis.

In the case of Britain, which has correctly called for a No Fly Zone from the outset, the government has nonetheless allowed its rhetoric to outstrip its capacity: making a botched deployment of a ‘diplomatic team’ with the SAS and proceeding with dangerous defence cuts amidst the crisis further limiting British force projection capability.

Abroad, the Obama administration has allowed its rhetoric to outstrip its willingness to act, with outgoing Secretary of Defense Robert Gates refusing to sanction a No Fly Zone. The French government, meanwhile, is the most out-on-a-limb having gone so far as to recognise the rebels as the official government of Libya.

If, as seems increasingly likely, the rebellion now fails the credibility of Western powers will be battered.

The region now faces even greater instability with a resurgent Gaddafi able to cause chaos on energy supplies to the EU, a major refugee crisis affecting Libya’s neighbours and an unfolding humanitarian disaster. The prospect of a vengeful Gaddafi seeking retribution against the Western governments that called for his ousting should also concentrate ministers’ minds as they consider the long-term implications of a possible return by Libya to state sponsored terrorism should he be allowed to remain in power.

America, Britain and France have one last chance to retain their credibility, act honourably towards the rebels they have constantly encouraged and support stability in the Middle East and North Africa. However Germany, backed by Russia, has today blocked plans for a Libya No-Fly Zone.

Under the Responsibility to Protect doctrine, NATO can impose an immediate No Fly Zone acting in co-operation with regional allies like the Arab League who already support such a move. Should that prove insufficient then airstrikes in support of the rebels should be considered.

The alternative is to stand aside and watch as Gaddafi perpetrates a massacre of his own people and Libya risks collapsing into a failed state.

22 Responses to “If the West doesn’t act, Gaddafi will massacre the rebels”