War, the eminent theorist Carl Von Clausewitz tells us, is essentially about mass and momentum; the Libyan rebels retreating from the oil rich town of Brega toward Ajdabiya appear to lack both, writes former Army Captain Patrick Bury. 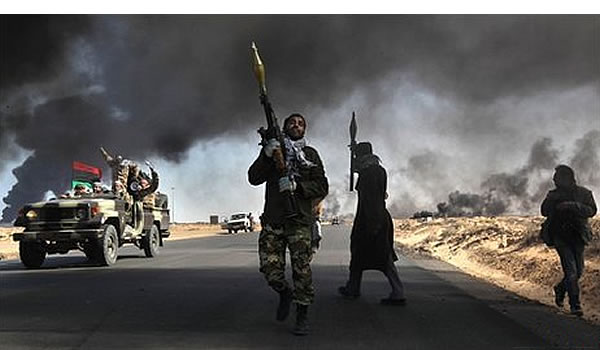 War, the eminent theorist Carl Von Clausewitz tells us, is essentially about mass and momentum; the Libyan rebels retreating from the oil rich town of Brega toward Ajdabiya appear to lack both, writes former Army Captain Patrick Bury

The battles being played out over the past week on the 1,800km of Libyan coastline share a key attribute with those of the North African campaign of almost 70 years ago – fluidity. The geography of Libya’s coastline, vast stretches of desert separated by strategically vital towns, present the same defensive and logistical problems for both attackers and defenders today as they did to Rommel and Montgomery in the Second World War.

The see-saw nature of the battles in the 1941-42 campaign saw the mobile and aggressive Germans sweep across much of Libya and into Egypt, only to over-extend themselves logistically and be forced all the way back to Tripoli by the British. By then the Brits had overstretched, and when attacked by refitted and regrouped Germans, they too retreated to their start lines behind Tobruk in eastern Libya.

Although on a far smaller scale, (many of the ‘battles’ reported seem to be skirmishes involving forces of tens rather than thousands) the conflict raging in Libya is being conducted in largely the same terrain as 1941, with many of the same factors at play.

Firstly, the 1,500 or so rebels also advanced with momentum, determination and what appeared a relative degree of mass, even threatening to take Tripoli. Then, too confident, they over-extended and were ambushed in Bin Jawa by forces loyal to Colonel Gaddafi, who counter-attacked and drove the rebels out of the strategic oil towns of Ras Lanuf on Saturday, and Brega on Sunday.

The next important town east of Brega is Ajdabiya, and rebels are preparing to make a stand here, whilst loyalist airstrikes threaten to cut their supply lines. The rebel commander, General Abdel Fatah Yunis, said in Benghazi on Sunday night that Ajdabiya, 170km to the west, was “a vital city” for the rebels.

“It’s on the route to the east, to Benghazi and to Tobruk and also to the south. Ajdabiya’s defence is very important… We will defend it.”

Herein lies another similarity with the North African battles of history: as forces retreat, they shorten their supply lines thereby strengthening their defensive capabilities, whilst attackers weaken as they advance. Nowhere is this more obvious than in Libya, with its vast coastline interrupted by logistically important towns.

Added to this, the rebels are falling back into their hinterlands and might expect to recruit more fighters as the battles draw near to the heart of the insurgency. But such retreats may not embolden those Libyans sitting on the fence, nor, perhaps, international action.

However, the rebels are poorly equipped relative to Gaddafi’s armoured, artillery and air forces and are facing logistical problems of their own; in many places relying on their popular support for food, water and ammunition re-supply. They also clearly lack command and control, weapons training and a basic understanding of military tactics.

Moreover, given the barren desertscapes between each coastal hub, when they decide to defend these towns at the peripheries, where the oil refineries are located, they are at a considerable disadvantage due to the greater stand-off bombardment capability of loyalist forces’ aircraft and heavy weapons.

So far, it is this capability that seems to have allowed the loyalists to deliver quick blows to the rebels in the east. But where the rebels have contested the urban space, as in Zawiya last week, they have sucked Gaddafi’s forces into a close-quarter battle which caused them considerable attrition. Such a fact provides a clue to how the rebels may defend their heartland of Benghazi.

Meanwhile, in western Libya on Monday rebel held Misrata and Zuwara were attacked by pro-Gaddafi forces, indicating that his forces may now have both the mass and momentum to enter Ajdabiya and to drive on to Benghazi as well, especially given the international community’s reluctance to act in any meaningful way.

This, of course, is precisely Gaddafi’s strategy: to take Bengahzi and quell the rebellion before any no-fly zone or airstrikes can halt his advance, thereby presenting a fait accompli to the international community.

But holding Benghazi will prove very difficult for loyalist forces. Mass and momentum will not matter as much, as displayed in Zawiya and especially when rebels are defending their homes and families and are faced with the prospect of brutal Gaddaiy repression. Even if loyalist forces take the city, the rebels will be likely to continue to fight.

They will adopt a-symmetric tactics, pitting their strengths against the weaknesses of Gaddafi’s forces. Given the popular support for the rebellion in Benghazi, a widespread insurgency/civil war in eastern Libya is likely to continue for some time to come, and we may in time see the development of an eastern Libya ‘rump state’.

Whichever way the pendulum of battle swings on the north African coastline at present, without decisive international intervention one way or another (special forces may already be operating with the rebels), Libya is probably staring into protracted civil war.

According to RUSI’s Shashank Joshi:

Libya’s has barely lasted a month.

7 Responses to “Mass, momentum and a-symmetry: What’s next for Libya’s rebels?”