For Nick Clegg, it seems motions passed at party conferences condemning the government’s health reforms could soon become the least of his worries, with the Liberals facing meltdown in Scotland and Wales. 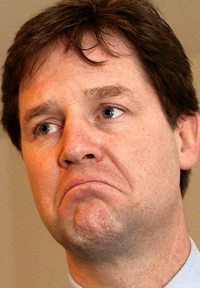 Speaking to his party’s spring conference in Glasgow this weekend, Alex Salmond said:

“With the people’s support I intend to continue to be Scotland’s First Minister.”

Call it bad timing, but his words coincided with new polling in the Scottish Mail on Sunday which suggest Labour remains on course to be by far the single largest party at Holyrood after May’s elections – with the Lib Dems facing meltdown north of the border.

The figures clearly show a healthy Labour lead on both the constituency and regional votes. On the constituency vote, of those who said they had definite voting intentions for a certain party, 43% supported Labour, 37% favoured the SNP, the Tories were on 11%, the Lib Dems on 5%, Scottish Socialists on 2% and the Greens were on 1%; while on the regional vote, Labour were on 44%, the SNP on 37%, Tories on 11%, Lib Dems on 4%, Greens 2% and the Scottish Socialists were on 1%.

Based on these figures, Professor John Curtice, elections expert at Strathclyde University, has argued that if replicated in May, such polling would see:

• The SNP would increase its number of seats by two, to 49;

• Most significantly, however, the current tally of 16 Lib Dem seats would be cut to just five.

“If these figures are correct then Labour, which has positioned itself as the party against the cuts, will be just short of a majority at Holyrood. The apparent collapse in support for the Lib Dems means we are unlikely to see a coalition.”

For Labour, the question were this to happen would be whether they would seek to govern alone as a minority or seek to shore their position up by entering a coalition with a smaller party, such as the Greens, as recently speculated upon in the Herald. The SNP meanwhile, has a fight on its hands, suggesting that a campaign based on their period of government alone will be insufficient. Given that recent polls have given Labour a commanding lead, February’s Ipsos Mori figures putting the SNP ahead of Labour now look increasingly like a blip.

However, it is the Liberal Democrats, facing, based on this poll, a meltdown in support north of the border that will have the most to worry about come May, with such a slump in support coming despite efforts by Scottish Leader Tavish Scott to distance himself from his colleagues in Westminster; in Wales, the picture looks even bleaker, with Roger Scully, director of Aberystwyth University’s Institute of Welsh Politics, having previously raised the prospect of the Lib Dems winning no seats at all in the newly empowered Welsh Assembly in May.

For Nick Clegg, it seems motions passed at party conferences condemning the government’s health reforms could soon become the least of his worries.