A third explosion in four days has rocked the Fukushima nuclear plant - raising fears of a meltdown; radiation levels around the plant for an hour's exposure are now eight times the legal limit for a year's exposure, rising to a level that will impact human health. 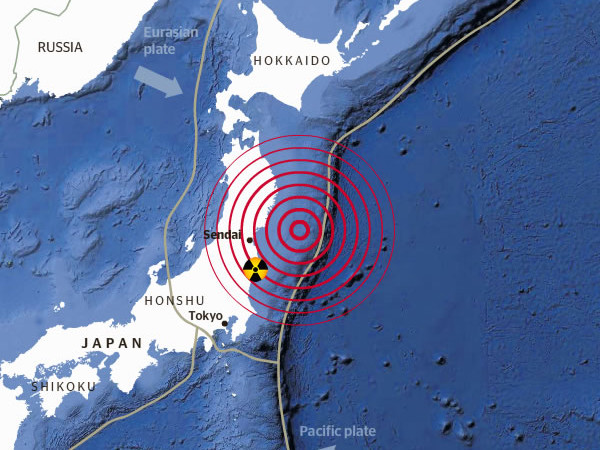 A third explosion in four days has rocked the Fukushima nuclear plant – raising fears of a meltdown. Japanese prime minister Naoto Kan said the level of radiation at the plant had “considerably risen”, with an increased risk of radioactive material leaking out. Radiation levels around the plant for an hour’s exposure are now eight times the legal limit for a year’s exposure – rising to a level that will impact human health.

“The reactors are at risk of going into meltdown because although they had shut down, the fuel rods continue to give off heat. Primary and backup power to the cooling systems was knocked out during the massive earthquake and tsunami that struck on Friday…

“The release of radioactivity has raised health concerns and wider fears of environmental contamination. Monitoring posts to the north-west of the power station recorded radiation levels at 680 microSieverts per hour on Monday, a dose roughly equivalent to four months of natural background radiation. An American warship, the USS Ronald Reagan, detected low levels of radiation at a distance of 100 miles from the Fukushima plant.

“Radiation levels have increased in the vicinity of the power station and nearby areas. Those caught in the evacuation zone around Fukushima were given potassium iodide pills to protect against thyroid cancer. Radioactive iodine is easily absorbed by the thyroid, where it can cause tumours, but the pills saturate the gland and obstruct the radioactive form’s absorption…”

The Telegraph reports that governments around the world have ordered urgent nuclear safety reviews as the crisis in Japan “continues to escalate”. The European Union will host an emergency meeting of energy ministers and nuclear safety officials, with the Swiss, Indian and German governments among those to act decisively to allay fears. Britain’s energy secretary Chris Huhne, meanwhile, has said the government will “examine closely any lessons” learnt from the quake experience.

And in The Times (£), Richard Lloyd Parry describes the “apocalyptic nightmare” engulfing Senen General Hospital, a place that resembles “a field hospital from an 18th-century war”:

“A heavy rug of mud covers the ground floor where the tsunami poured in, and candles illuminate the shadowy corridors. The nurses sleep in their wards, and the chief doctor doubles as a cook, stirring a pot of noodles. The toilets are blocked and smelly, and from the wards can be heard the groans of patients who have had nothing to eat but bread and crackers.

“Two hundred yards away, one detail completes the impression of apocalypse: huge flames thrown up from a fire in the petrol refinery next door.

“Senen General is a hospital of 113 patients and two doctors, without water, electricity and scarcely any food or drugs. It is a symbol of the change that the earthquake and tsunami have brought to parts of Japan; an advanced 21st-century society reduced in a few minutes to the condition of Third World desolation. And yet, even in the worst-hit areas, there is not a trace of helplessness or obvious anger.

“In many countries, a natural disaster this huge would be a cause of self-pity. In Japan, one finds a practical, unfussy and ingenious concentration on practical solutions…

“The authorities are probably doing all that they can. Every day this disaster outstrips the worst expectations. The statement by the prime minister, Naoto Kan, that this is Japan’s darkest hour since the Second World War does not sound hyperbolical – and well-informed people are now talking seriously about the possibility of tens of thousands of dead…”

As the prime minister told the Commons yesterday:

“The devastation we are witnessing in Japan is of course of truly colossal proportions. It has been heart-breaking to listen to people who have had all their relatives, their friends, their possessions and their homes simply washed away. Those who have survived will not recognise the place where their homes once stood.

“We do not yet know the full and dreadful death toll, nor can anyone truly understand the impact these events will have, but Japan and the Japanese people are a resilient and resourceful nation. Britain and the British people are your friends and we have no doubt you will recover.”

• You can make a donation to the Japan tsunami appeal via the British Red Cross, Save the Children, World Vision and Oxfam.