The man in charge of the Tories' Scottish election campaign claims the party's been "detoxified" and is on course to improve on the 17 MSPs currently held. 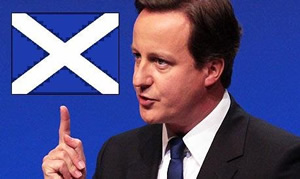 Speaking to the Scotsman, he claimed:

“By the election we will have had a year of the Tories in government and whatever grumbling there is, people will recognise that the government has done positive things.

“It’s going to be the first Scottish Parliament election in which we’ve had a Tory prime minister at Westminster.

“We’re not going to run away from a defence of the difficult decisions being taken by the UK government.”

His words, however, have been met with both curiosity and derision from political opponents, not least after the release on Sunday of new polling by YouGov, reported in the Sunday Herald, which found:

The polling comes just weeks after Ipsos Mori reported that the SNP were ahead of Labour by just 1%; either way, the figures for the Conservatives were not good, compounding the questions around Mr McLetchie’s assertion.

Responding to his remarks, Scottish Labour MP Thomas Docherty accused McLetchie of being “delusional”. He said:

“To suggest the Tory-Lib Dem coalition government’s policies are popular in Scotland is delusional. Scotland suffered at the hands of the Tory governments in the 1980s and 1990s, with a raft of pit and shipyard closures.

“Now the Tories in Scotland are yet again backing the same failed Thatcherite policies.”

McLetchie’s comments follow those of William Hague who, during the General Election, predicted a “breakthrough” for the party in Scotland. In the end, it returned just the one re-elected MP in Scotland.

David Torrance, who has written both a biography of Alex Salmond and a book on Margaret Thatcher’s relationship with Scotland, said of McLetchie’s comments:

“Conservative prime ministers are rarely an asset north of the border (Sir Alec Douglas-Home was probably the last), and David Cameron is no exception.

“Despite a good start, Mr Cameron has noticeably cooled on his ancestral homeland since last May, and will probably put in no more than a token appearance at the party’s conference in Perth in a few weeks’ time.

“Far from ‘detoxifying’ the Conservative brand in Scotland, as McLetchie claims, there’s a real danger that – in the eyes of many Scottish voters – the Tory-led government is simply conforming to type, or more accurately stereotype in the context of Scotland.”

9 Responses to “Has Cameron “detoxified” the Tories in Scotland?”