As prime minister Cameron outlined that the UK “does not in any way rule out the use of military assets”, former army Captain Patrick Bury takes a look at exactly what assets are available. 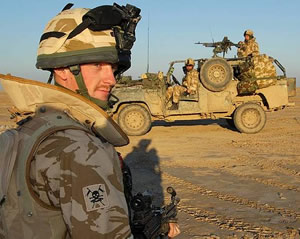 British military options for dealing with Colonel Gaddaffi’s increasingly desperate and violent regime have been limited due to ongoing operations in Afghanistan, while cuts in defence spending have also curtailed the UK’s force projection capability; as prime minister Cameron outlined that the UK “does not in any way rule out the use of military assets”, former army Captain Patrick Bury takes a look at exactly what assets are available

Firstly, at present the UK’s high readiness ground forces, known as the Spearhead Lead Element, consists of one battalion of about 700 Marines and support staff. The current unit on SLE is 40 Commando, who are still recovering from a grueling tour of Sangin last summer.

Traditionally, the SLE role is seen as a way of getting a unit back to operational standard after an Afghan tour, and although taken seriously, the likelihood of being deployed is generally considered slim by the already over-stretched military.

In recognition of the inadequacy of the current high-readiness arrangement, the UK is set to hold the elite 16 Air Assault Brigade in reserve for future contingencies after they return from Afghanistan in a month.

But that doesn’t help things now…

Secondly, as in Sierra Leone in 2000, high-readiness forces generally need maritime platforms from which to deploy. These need the right air and force protection assets to ensure a safe and uncontested operational deployment. Harrier jump jets were an excellent way of protecting the operational space for these deployments, but along with the aircraft carrier Ark Royal, they have now been retired.

Moreover, mothballing one of the Navy’s amphibious landing ships, the Bulwark, has cut the UK’s capability in this regard in half.

Thirdly, the Navy is to lose four Type-22 frigates this year, vital for keeping sea lines of communication open and sustaining forces ashore. The ship that enabled the Non-Combatant Evacuation Operation (NEO) from Benghazi, the HMS Cumberland, is due to be scrapped in April.

Added to this, the retiring of the aged Nimrod air surveillance aircraft has severely curtailed the UK’s ability to collect intelligence using stand-off low risk strategies. The Nimrod platform would prove very useful in collecting information on the current situation in Libya, for example.

Fourthly, Gaddafi’s armed forces have much greater capabilities than, say, the Taliban, including surface-to-air missiles, 220 jet fighters, warships and missile patrol boats. An operation in this environment would therefore require the strategic assets Britain has committed itself to getting rid of.

So enter the Americans: 2,000 US Marines, probably the best ground forces on the planet at present, and an aircraft carrier laden with jets, are steaming toward the North African coast now. The French are also considering their considerable military options.

The British, for their part, are right to push for a NATO enforced no-fly zone. Indeed, it is the most realistic option for curtailing Gaddafi without getting forces embroiled in another ground war in an area of questionable vital interest. Deploying Eurofighter jets from Cyprus could be an option for the UK, but leaves little time on station for pilots, as Malta’s airport is likely to be unsuitable.

Britain’s world class special forces remain another option, but are also on taxing rotations in Afghanistan.

Unfortunately, events in Libya have exposed British defence weaknesses. The British ground force toolkit for dealing with such contingencies post-defence cuts is pretty limited. And it’s not just the ground forces toolkit that’s the problem; the whole spectrum of the UK’s strategic defence assets are being curtailed.

As one officer put it last week:

“The locker is not just empty, it’s completely threadbare.”

11 Responses to “Britain ‘ready to use’ what ‘force’ exactly?”