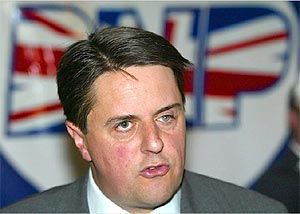 Having first used a ‘vote down AV or the baby gets it’ line, then having smeared Yes to Fairer Votes funders, while refusing to reveal their own, the No2AV campaign, via the Daily Mail, is trying a new tactic: presenting untruths.

The Mail reports today, under a craftily framed headline, that there are ‘fears’ a move to AV could give BNP voters “more say at the ballot box”. This must be why the BNP is against AV.

To be fair, the Mail do report this but bury it two-thirds of the way down the piece in small paragraph sandwiched between anti-AV rhetoric.

“Election candidates will have to pander to the views of supporters of the far-Right BNP and other minority parties if Britain agrees to scrap the traditional first-past-the-post electoral system, campaigners warned last night…

“Those voting for the BNP and other small parties will see their votes counted over and over again, with their second, third and subsequent preferences influencing the result.”

The Mail then went on to report research from the No to AV campaign on the general election in 2010 that claims:

“More than 90 per cent of Labour and Conservative voters would have been unlikely to get a second vote.

This is a completely false presentation of the facts. There is no truth in claim that those who vote for extremist parties get extra votes.

As Will Straw wrote here:

“With AV everyone gets one vote. The difference is that with AV gives you a vote that really counts and more of a say on who your local MP is. If your first choice gets knocked out your vote is transferred to your second preference.

“But regardless of whether you just vote ’1′ for your favourite candidate or list a preference for every candidate on the ballot, only one vote will be counted. If you go to the pub and order a pint of Carling but they are out of Carling and you choose a pint of John Smith’s instead, you’ve still only had one pint.”

On the issue of extremism this is particularly disingenuous.

AV encourages parties to reach out to the mainstream in order to win second and third preference votes from other main parties. Why would you reach out to the supporters of a party that secured under 2% of the national vote at the last election. AV provides a clear block to so-called “Marmite” parties.

Sunder Katwala destroyed the myth that AV is good for extremism here earlier this month:

“Leading pollster Peter Kellner has set out why the BNP’s call for a No vote makes sense from the viewpoint of their own party interest – and has called AV: ‘The most extremist-proof of all electoral systems.’

“The reason why is captured in today’s shock opinion poll in France, which has Le Pen of the Front National as the leading candidate with most first preference votes:

“Le Pen may be the first-past-the-post leader in this one poll. But, under the French second ballot, a close cousin of the Alternative Vote, we know that Le Pen would be opposed by 75% of voters if she made the final two-candidate run-off, as centre-right and centre-left voters would rally to the mainstream democratic opponent, as we saw in 2002, when the Front National eliminated the Socialists, whose voters supported Jacques Chirac.”

May be its time for No2AV to turn to plan D – discussing the facts of the argument?

40 Responses to “The Daily Mail, fascism and No2AV: A comedy of errors”