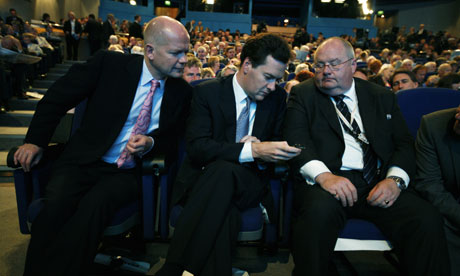 After four recent polls showed the Yes to AV campaign in the lead, a spate of recent articles have highlighted the concern in the Tory party that the referendum may be lost. It appears that David Cameron’s intervention at the weekend showed that the Prime Minister had finally worked out how much he had to lose from a ‘Yes’ vote.

Conservative Home’s Paul Goodman has been banging the drum for a couple of weeks on how a ‘yes’ vote would make David Cameron a “lost leader” but the rest of the Conservative hierarchy appears to have woken up to the problem.

Mr Cameron is a worried man, I’m very reliably informed. The PM has ordered an emergency push to deliver a “no” in the AV referendum at all costs.

The word has gone out from Mr Cameron – “we cannot afford to lose”. Party chairwoman Sayeeda Warsi is under orders to campaign tirelessly and publicly to get the “no” vote out. And the Premier himself will become visible and vocal. One well-placed source tells me: “The PM has made it clear; there is no question of backing down on this.”

The Conservative high command is keeping a very close tally, I’m told, of how many anti-AV leafets are ordered from Tory HQ by each local constituency association in the run-up to May’s referendum.

The leaflets can be purchased at a cost of just £10 per thousand, I hear, which would work out at about £300 for a whole constituency.

A Conservative source in Downing Street source tells me: “When our MPs in the tea room complain we’re not running a good campaign, we can turn round and say: ‘Hang on, your local party’s only ordered 103 of our leaflets so far!'”

As Channel 4 News’ Gary Gibbon put it on Saturday:

“The argument used to run that losing the AV referendum would be critical for Nick Clegg. Now it looks like losing the referendum the other way could be much worse for David Cameron.

Indeed so bad has it got for the ‘No’ campaign that their campaign director, Matthew Elliot, was forced to test out his strategy online this morning. He suggested that while it was acceptable for the No campaign to attack Nick Clegg, the Yes campaign would have “lost their way” if they started attacking David Cameron.

There are many principled reasons for voting for AV but giving the growth denying, public service destroying trio of Cameron, Osborne, and Pickles a bloody nose has just become a rather attractive unprincipled one to add to the list.

48 Responses to “Conservative jitters reveal cost to Cameron, Osborne and co of a ‘Yes’ victory”