Pretty much everybody apart from hard-right Tory backbencher Philip Davies and groups funded by the tobacco industry support the government's plans on tobacco advertising. 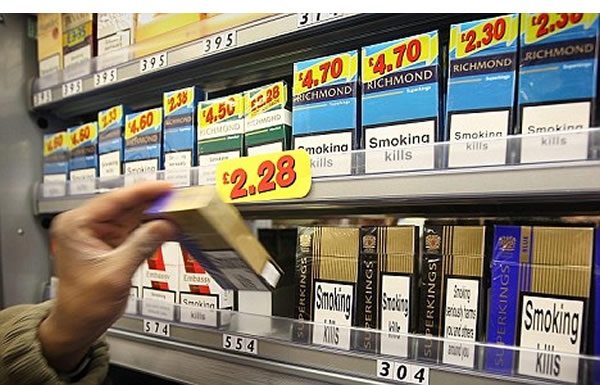 Early this morning I had a discussion on the BBC with Tory backbencher Philip Davies. Apparently, because I support the proposed curbs on tobacco marketing I am an extremist who will never be satisfied. Me and the Royal College of Physicians, BMA, Cancer Research UK, 170 other health groups in the Smokefree Action Coalition, the Labour Party, the Lib Dems, the SNP and the Tory front bench. Pretty much everybody apart from Davies and groups funded by the tobacco industry.

The 1997 Labour government made tobacco policy its own. Labour’s “Smoking Kills” white paper put the UK at the forefront of tobacco policy in Europe. However, the burden of smoking related disease falls most heavily on the most disadvantaged and to this day, half the difference in life expectancy between richest and poorest is down to smoking.

Today sees the publication of something we have never seen before – a Tobacco Plan from a Conservative led Government. The tobacco industry’s tactic of lobbying secretly behind retailer front groups has been exposed and appears to have been largely ineffective, so Labour’s legislation to ban cigarette vending machines and tobacco product displays has survived largely intact.

Unlike other areas of policy, the coalition has shown remarkable continuity with the policy of the last Labour government. When the Conservatives gave a free vote on the ban on smoking in public places they set the permitted politicians to listen to the evidence, making tobacco policy a cross party issue.

The coalition even appears to be adopting one of Labour’s most ambitious ideas – a law to get rid of what health secretary Andrew Lansley now calls the “glitzy packaging” of tobacco products. Australia is already set to be the first country to put tobacco in plain packaging from the middle of next year. The government there has been persuaded by academics whose research shows:

• How the tobacco industry uses packaging to make their brands more attractive to young people;

• How colour coding packs in red, gold and silver misleads smokers into thinking some cigarettes are less harmful or addictive than others;

New research published here for the first time shows there is already widespread support for plain packaging and as the public comes to understand the evidence better, support is set to grow.

Even smokers are more supportive “if” there is evidence that plain packs would be effective, particularly in making cigarettes less attractive to young people. Under these conditions 64% of daily smokers would support the introduction of plain packaging.

There are clear parallels with the rise in support for the ban on smoking in pubs and clubs. Support stood at a little over 50% in 2004 but according to a report by the Royal College of Physicians, as the public came to understand the evidence better, by 2007 – when the law was implemented – support had grown to more than 75 per cent.

Since implementation, as people have seen the benefits for themselves support has risen to 80%, rising fastest among smokers.