Is a negotiated peace in Libya possible? Left Foot Forward's George Irvin looks at the arguments. 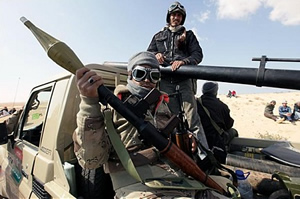 According to today’s papers, the Turkish prime minister, Recep Erdogan, has signalled that Turkey is ready to act as a mediator in brokering an early ceasefire in Libya. Erdogan is said to be in contact with both sides, and has warned that in the absence of a negotiated solution, Libya could become another Iraq or Afghanistan. Is a negotiated peace possible? What are the arguments?

On the face of it, Turkey has a strong case. Nato is in the process of taking over the show from the Americans.

Turkey has Nato’s second largest army and is the only state which commands credibility amongst the many millions who see the West’s ‘humanitarian’ intervention in Libya as an excuse for defending long-standing imperial strategic interests.

Erdogan is reported as saying

One may dismiss the idea of that Libya, with a population of only 6.5 million spread out over an area the size of Western Europe, ever becoming another Afghanistan or Iraq.

But the matter boils down to this:

• First, ‘coalition forces’ arguably have already exceeded their UN mandate by destroying Gaddafi’s ground forces when these forces were not actually shelling civilians;

• Secondly, part of the Libyan population clearly supports Gaddafi. The closer the rebels come to Tripoli, the more likely it is that ‘coalition’ air strikes in support of the rebels will inflict ‘collateral damage’ on regime supporters;

• Thirdly, the more blatantly the UN mandate is infringed, the less credibility UN power will have, a matter of real concern not just to Turkey, but to Russia, China, India and other emerging powers. On the above logic, a negotiated solution becomes more likely by the day.

Indeed, on this morning’s Today programme, Nato Secretary-General Anders Fogh Rasmussen was asked repeatedly whether Nato would bomb anti-Gaddafi forces if they threatened civilians. Fogh Rasmussen, an ex-right wing Danish prime minister, evaded the question for a time but was eventually forced to say that they would.

What was left unsaid is that the rebels have at best some 5,000 (mainly untrained fighters), while Tripoli, traditionally a Gaddafi stronghold, is a city of 700,000 which lies at the end of a 1,000 km supply line. Tripoli is not going to be taken without intensive Nato air and missile support.

As Seamus Milne has written:

“There’s also every chance that, as in Kosovo in 1999, the attack on Libya could actually increase repression and killing, while failing to resolve the underlying conflict…

“…any Arab opposition movement that comes to power courtesy of Tornadoes and Tomahawks will be fatally compromised, as would the independence of the country itself.”

So will we see a brokered settlement based on the west of the country (Tripolitania and Fezzan) remaining under regime control while the East (Cyrenaicia) becomes a Nato protectorate? Or will Ghadaffi’s regime implode as Tripoli is encircled and comes under direct threat?

Whatever one’s personal preferences, my guess is that the Americans – who continue to run the show through Nato – have decided to take out Gaddafi whatever the political and human costs. Expect the air and missiles strikes to intensify, regardless of civilian casualties.

And barring a lucky hit on Gaddafi, don’t expect the conflict to come to a quick conclusion.

4 Responses to “Can peace be brokered in Libya?”