The BBC are reporting that Rupert Murdoch has been given the go ahead for News International's controversial takeover of BSkyB. The move is likely to inflame campaigners. 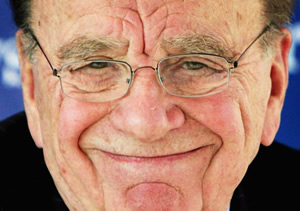 The BBC are reporting that Rupert Murdoch has been given the go ahead for News International’s controversial takeover of BSkyB. The move is likely to inflame campaigners.

The global online campaigning group, Avaaz, yesterday organised over 30,000 messages and phone calls to Parliament. While a petition on the Avaaz website has been signed by close to 250,000 people. An email from Executive Director, Ricken Patel, last night told campaigners:

“Murdoch has used his vast media empire to push war in Iraq, elect George W Bush, and block global action on climate change, and if he wins this week in Britain he will use his networks here to undermine all the issues that we care about. He has manipulated US, British and Australian democracy for years, but now he wants more complete control. In the US, most of the likely Republican presidential candidates are actually paid employees of Murdoch! When his Fox News Network was shunned by Barack Obama as a mere propaganda mouthpiece, it spawned the far right “tea party”and broadcast constant, often hate-filled attacks against Obama and his healthcare and peace agenda — resulting in a huge win for Republicans in the 2010 congressional elections.

“Murdoch media staff have trampled laws and standards when gathering news. Several News Corporation executives approved phone hacking and, when a formal investigation began, they had regular secret meetings with senior police officers who then failed to investigate the full extent of the scandal. Our government should punish such an organisation, not allow it monopoly powers over our media. But if Rupert Murdoch is allowed to buy all of BSkyB this week, he will soon own half of our commercial newspapers and television. This should not be allowed in any democracy.”

“Rather than worry about Rupert Murdoch owning another TV channel, what we should recognise is that he has probably done more to create variety and choice in British TV than any other single person because of his huge investment in setting up Sky TV, which, at one point, was losing several million pounds a day.

“We would be the poorer and wouldn’t be saying that British TV is the envy of the world if it hadn’t been for him being prepared to take that commercial risk. We need to encourage that kind of investment.”

So much for an impartial decision.

49 Responses to “Campaigners ignored as Murdoch gets go ahead”