In the wake of yesterday's Budget, Tim Horton and Howard Reed present an updated distributional analysis of the effects of the coalition’s major direct and indirect tax changes. 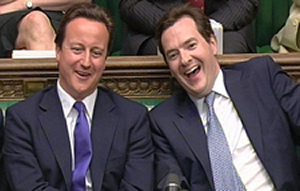 Following last year’s June 2010 budget we produced a distributional analysis of the impact of the above-inflation increase in the income tax personal allowance (from £6,475 to £7,475) and the 2.5 percent increase in VAT.

Our analysis showed that the combined impact of these tax measures was regressive – hitting people with the poorest net incomes hardest (adjusted for household size).

Both those measures come into force this year: the VAT rise occurred in January, while the allowance increase takes effect this April.

In yesterday’s budget speech George Osborne announced a further increase in the income tax personal allowance – to £8,105 – from April 2012. Another (pre-announced) change is that this April, the thresholds for National Insurance Contributions (NICs) for employees and self-employed people will rise roughly in line with the increase in the personal allowance, but there is also an increase of 1 per cent in the contributions rates above this level.

In this post we update our distributional analysis of the effect of tax changes under Mr Osborne to take account of the further increase in the income tax allowance and the employee and self-employed NICs changes. The analysis also uses updated income distribution data (from the 2008-09 tax year) and improved modelling techniques.

The graph below shows the distributional impact of these tax changes by April 2012 compared with the April 2010 tax system that the coalition government started with, and correcting the April 2012 thresholds and allowances for inflation.

• The impact of each change is shown as a percentage of household net income (rather than in cash terms).

• The income tax cut gives the most money (as a proportion of net income) to households in the middle of the income distribution. Households at the bottom mostly have incomes below the initial (April 2010) allowance level of £6,475 and so do not gain from the allowance increase.

• Because the increase in the allowance is worth a maximum of £326 per person in nominal terms, the impact for people on higher incomes is lower as a percentage of net income, but the higher number of two-earner households in the middle deciles means they gain more (on average) overall than the lowest deciles.

The national insurance changes also have a positive net impact for the bottom two-thirds of the income distribution, although the increase in the lower threshold is offset by the increase in NICs rates which means the positive effects are smaller, and for households in the top four deciles the NICs changes reduce income.

Overall the distributional impact of the tax changes is an “inverted U shape” – with the poorest households and the richest households losing more than households in the middle.

The government’s own analysis of distributional effects of the tax changes (Figure A.3 in its Budget document [pdf]) suggests that the changes are much more progressive than this at the top end of the distribution but that is because Table A.3 includes the tax increases above £100,000 (withdrawal of the personal allowance and the introduction of the 50p income tax rate) announced by Labour in 2009 which came into force in April 2010, before the Coalition took office.

Here we confine ourselves to direct and indirect tax changes taking effect in 2011 and 2012.

Our analysis also does not include changes to benefits and tax credits which (as the Institute for Fiscal Studies showed in its post-spending review presentation last October, are regressive overall. So, overall, the tax changes introduced this year and next will increase the squeeze on Britain’s poorest families.

Finally, it’s worth remembering that the swingeing cuts announced in the spending review will have the biggest negative impact on the living standards of the poorest families – as shown in previous analysis we conducted back in the Autumn.

The Budget made no attempt to lessen these service cuts.