TUC general secretary Brendan Barber explains why the March for the Alternative has come just in time. 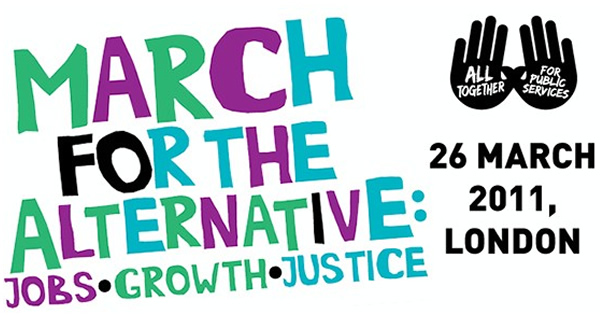 Brendan Barber is the general secretary of the TUC

The March for the Alternative has come at just the right time.

On Wednesday we had what was proclaimed as a budget for growth which the chancellor’s own advisers in the Office for Budget Responsibility promptly said was no such thing, and most people seem to have already forgotten. It is now much harder to dismiss the warnings we made last year that these deep cuts will harm the economy by hitting consumer and business confidence.

Even the boss of Sainsbury’s is blaming poor results on what the Daily Mail calls “uncertain employment prospects and government spending cuts”.

Next week, as the financial year starts, the cuts will really start to bite. Local councils and community groups will start closing services and sacking staff in their thousands.

The NHS reforms seem to run into more difficulties every week as first the Lib Dems and even Conservative backbenchers get increasingly assertive in their opposition.

The government is losing the argument. Big majorities now say the cuts are unfair and that they are damaging the economy.

All round the country campaign groups are springing up to battle the cuts. Almost every part of the public sector has seen people coming together to stand up to defend their bit of the public realm. And there have been victories too with at least partial U-turns on forestry, school sport and even the NHS reforms.

Although the papers are full of right wing commentators saying that we are no more than a minority vested interest, a new YouGov poll today shows that it is they who are losing. When asked, “Generally speaking, do you support or oppose the aim of the march to campaign against public sector spending cuts?” 52% say yes and only 31% say no. Even one in five Conservative voters agree with us.

That is why the turn-out today promises to be huge.

Of course I do not expect an ashen-faced David Cameron and contrite Nick Clegg to hold an emergency press conference tomorrow where they announce that they have been wrong all along. Nor do I think that a single demonstration – however big – adds up to a campaign.

But what the TUC is doing today is providing a national focus that can bring together local and sectoral campaigners. It will be a huge morale boost. All of us who say that what the coalition is doing is a deliberate political choice, not an economic necessity, will take heart.

And the real test today is not the turn-out but whether we return home even more determined to defend public services and step up the arguments for the alternative.

29 Responses to “Why we need to March for the Alternative”